‘This award stands for the hard work and efforts we as a company have put in ensuring the lives of the Zambian people are improved, and the contribution we have made to the region’, said ZESCO Managing Director Cyprian Chitundu recently when he received the African Utility Week award as Utility Executive of the Year.

ZESCO (Zambia Electricity Supply Corporation Limited) is Zambia’s largest power company producing about 80% of the electricity consumed in the country. 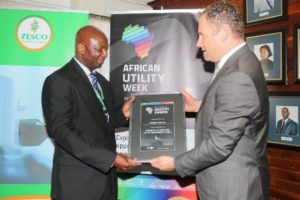 In May this year, Chitundu was named Utility Executive of the Year at the inaugural African Utility Week Industry Awards during the event in Cape Town. As he was unable to personally receive it, David Ashdown, managing director of Spintelligent, organisers of the African Utility Week, recently visited ZESCO offices in Lusaka to hand over the award in person. ZESCO was also shortlisted in the category of Power Utility of the Year.

Ashdown said it was an honour to be received at ZESCO and to be able to hand over the coveted award to Chitundu in person.

‘Mr Chitundu is a worthy winner indeed. Our esteemed panel of judges of the African Utility Week Industry Awards found that he has driven ZESCO through the most aggressive expansion plans. Major projects within the transmission and generation sectors have been made possible thanks to Mr Chitundu’s contribution.

‘With his assistance ZESCO has completed the rehabilitation project that started a decade ago. The Kariba North Bank Power Station has been rehabilitated and expanded from 900MW to 1080MW and the Kafue Gorge Power Station from 720MW to 990MW’, Ashdown said.

Mr Chitundu responded that it was ‘an incredible honour and privilege to be recognized as the African Utility Week Chief Executive of the Year, and even more so receive on behalf of ZESCO as finalist African Power Utility of the year, 2013/2014. I am grateful to all the African utilities for this noble gesture, for believing in me as a person to the point of giving me an award, and to ZESCO which means so much more to me. It is a great deal to us’.

Chitundu continued and acknowledged the hard work shown by his team and highlighted that if it wasn’t for their efforts he would not be where he is today.

The next African Utility Week Industry Awards will take place again on 13 May 2015 at the 15th edition of the event at the CTICC in Cape Town. The awards celebrate the triumphs and successes of Africa’s power and water sector during 2013, highlighting those companies and executives who have been responsible for pioneering new frontiers, pushing boundaries, inspiring others and achieving growth in turbulent and challenging markets.

The organisers have invited the industry to nominate their success stories and top executives: http://www.african-utility-week.com/industryawards