In the below figure, it is a typical waveform to simulate eternal fault. From the figure, it is phase A grounded fault. The waveform from top to below is phase A, B and C voltage, phase A, B, C current. The lowest is the 4-channel binary waveform. The first channel is connected with the phase A analog circuit-breaker’s contact and the fourth channel is connected with the relay’s reclosing exit contact.

The waveform and binary trip are correct from the beginning. The waveform and binary inverse are exactly consistent, but the problem is located in the last accelerated part. After the after-acceleration action tripped secondly, it should keep binary output status until the test ends. But from the wave recording at phase A analog circuit-breaker’s contact there was a slight pulse after accelerated tripping and the related wave jittered. It indicated there was reclosing and tripping in short time after the circuit breaker accelerated tripping 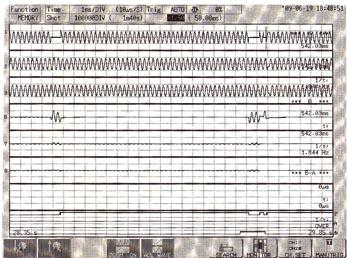 After contacting with customers, our engineers found the fourth binary in the diagram was the contact of reclosing exit. There was a reclosing pulse. But we checked carefully: after the acceleration tripping, the reclosing pulse still existed. The reclosing circuit of the breaker was still on state. By this the breaker will reclose again. Here we couldn’t see the tripping pulse, but we can imagine the tripping pulse didn’t disappear in wrong reclosing tripping. So the tripping circuit of the breaker was still on state. Then the analog beaker tripped again, this was the reason that appeared the slight pulse. After that we could see the pulse inverse end, so there was no the third reclosing.

This analysis is approved by customers. We lengthen the tripping/ reclosing time of the breaker and make test again, then the jitter disappears.