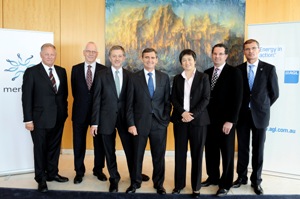 The Macarthur Wind Farm will become the home of the largest wind farm in the Southern Hemisphere, with 420 MW of clean and renewable energy generation capacity coming from 140 new V112-3.0 MW wind turbines.

The Macarthur project is being jointly developed by AGL Energy Limited and Meridian.

AGL is a publicly listed electricity generator and retailer operating in the Australian market, while Meridian is the largest state-owned renewable energy generator and retailer in New Zealand and a renewable energy developer in Australia. Both AGL and Meridian are Vestas global key account customers and have existing wind farms with Vestas at the Wattle Point (AGL), and Te Apiti and White Hill Wind Farms (Meridian).

The Macarthur site is located in the Western District of Victoria, Australia, between the towns of Macarthur, Hawkesdale and Penshurst.

Vestas, in consortium with Leighton Contractors will jointly install the Macarthur Wind Farm. The contract comprises a full engineering, procurement and construction contract (EPC), a ten-year service agreement and a VestasOnline® Business SCADA solution. The first turbines are expected on site during Q3 2011 with the whole project expected fully installed by the first half of 2013.

“Vestas is a world leader in wind power manufacturing and we feel very confident in choosing Vestas turbines for the Macarthur Wind Farm. We believe our agreement with Vestas and the use of its latest technology will result in a very successful project. We are delighted to be one of the first customers to utilise the V112-3.0 MW turbines,” says Michael Fraser, Chief Executive of AGL.
“The low Cost of Energy and the higher installed MW with fewer turbines were the attractive propositions of the V112-3.0 MW turbine. To ensure that the V112-3.0 MW platform is the right solution for the Macarthur project, we did extensive due diligence through site visits and technical meetings,” says Tim Lusk, Chief Executive of Meridian Energy and adds: “We have built a strong relationship with Vestas over the years in New Zealand and committing ourselves to this product shows our faith in Vestas to deliver our priorities.”

The Macarthur Wind Farm project is one of many that relies upon the Australian Parliament’s 20 per cent Renewable Energy Target (RET), passed in late June this year. The RET will help to provide Vestas’ customers with the business case certainty they require to build projects of this size and will be a strong support to the development of wind power projects such as Macarthur.

“We are proud once again to be working with AGL and Meridian, and particularly proud that they have chosen Vestas and the new V112-3.0 MW for this record-breaking clean energy project,” says Sean Sutton, President of Vestas Asia Pacific. “This project represents the largest single order for Vestas Australia and Asia Pacific and is also the largest wind power project to be announced after the establishment of Australia’s renewable energy targets earlier this year. The new V112-3.0 MW is a perfect solution to meet AGL and Meridian’s needs for a highly-productive and cost-effective turbine for the medium wind speeds on the project site. I would also take this opportunity to thank Leighton Contractors and my colleagues at Vestas Australia for their involvement and dedication to secure this order.”

“The V112 turbine delivers high productivity due to its large swept area, higher rotor efficiency and better serviceability and reliability, which in turn improve availability. Its reliability is assured through Vestas’ state-of-the-art testing centre,” says Finn Strøm Madsen, President of Vestas Technology R&D and continues: “With this order, we have now released the new V112-3.0 MW turbine for sale for both onshore and offshore.”

“We are extremely pleased to be able to launch the new V112-3.0 MW turbine by the signing of this order with two of our key account customers,” says Ditlev Engel, President & CEO of Vestas Wind Systems A/S and continues: “We have high expectations for this new turbine and we consider AGL and Meridian’s choice of turbine for their prestigious project a positive acknowledgement of our technological efforts. Finally, I wish to congratulate all Vestas colleagues who have been involved in securing this order, which has been done through a truly global effort.”