There are common and divergent themes in the risks faced by electricity utilities around the world compared with those in Africa specifically.

At African Utility Week, held in Cape Town during May 2013, Ernst and Young released a power and utilities report that explores the risks and opportunities in the global electricity sector. It is based on surveys of companies in 20 countries, though only South Africa was represented from an African perspective. African Utility Week, increasingly the premier utilities and power sector event of its kind in South Africa, also hosted a CEO forum to explore the risks faced by power utilities in Africa.

The top risk identified by the Ernst and Young report relates to compliance and regulations, which often have opposing goals. An example is how governments and regulators favour low-carbon power generation but at the same time public concerns over costs weigh heavily. Companies in the power and utilities sector also see the related and increasing risk of political intervention.

A top three risk identified by the survey, commodity price volatility and access to competitively priced long term fuel supplies, is a universal one. This could take the form of uncertainly regarding pricing of global gas supplies, concerns by countries in Africa using diesel generator sets having to distort balance of payments to import diesel and gas for power generation, or concerns in countries such as South Africa about securing reasonably priced coal into the future.

Other top ten risks identified by the Ernst and Young report are: uncertainty in climate policy and carbon pricing; significant shifts in the cost and accessibility of capital; capital project execution; economic shocks and resulting short term energy demand shocks; a war for talent; aging generation and network infrastructure; and managing planning and public acceptance.

Climate policy and carbon pricing is a global issue and a country like South Africa is strongly affected. This has played a big role in its energy sector policy development. However, for much of the continent, the priority is on how to increase access to electricity. While aging infrastructure is an issue globally, in Africa lack of infrastructure is the stronger issue.

Thus, some of these risks mentioned will resonate more strongly among African utilities, some less so. Based on the discussions at the African Utility Week CEO forum, which included leaders from major suppliers and a variety of electricity utilities across the continent, the most oft-mentioned risks faced by power utilities in Africa are the sourcing of sufficient additional generation capacity and the associated accessibility of capital. Another risk seen by African utilities, not listed among the top 10 of the Ernst and Young report, is the need to reduce technical and nontechnical nontechnical system losses and ensure payment for the supply of electricity to customers, which in turn puts pressure on supporting, maintaining and extending electricity infrastructure.

Interestingly, what is broadly seen by emerging market utilities as among the largest risks, is seen by the global electricity sector as the biggest opportunity – the rising energy demand in emerging markets. Some countries across Africa have been wrestling with the question of liberalising their markets. Some partially freed up their electricity sectors but did not see a response in investment and that dims enthusiasm for deregulation.

Possible reasons for this lack of investor response were raised at the CEO forum, and included the perception of Africa as high risk, as well as uncertainty as to whether creditable partners exist in African countries. As one member of the forum asked, “Why is the perceived risk only in Africa’s power sector? The continent is seeing a lot of investment in mines. People wanted regulation, countries have introduced regulations. People wanted price reflectiveness and when that is introduced then they want government guarantees. What is missing in the electricity sector? What has happened in the cell phone business that is not happening in the electricity business? One would think the power sector would be one of the most secure sectors to operate in.”

Is it simply a matter of marketing the continent’s power sector better; may it just be a question of doing better public relations and improving its image? That will not eliminate the concerns that investors have regarding projects, of knowing what will happen tomorrow in terms of governance and political uncertainty. What emerged from the CEO forum is that in Africa one can have a lot of laws that can change overnight, depending on who is in power. This does merge with the leading risks seen by utilities globally, and certainly is not a concern limited to utility CEOs in Africa. 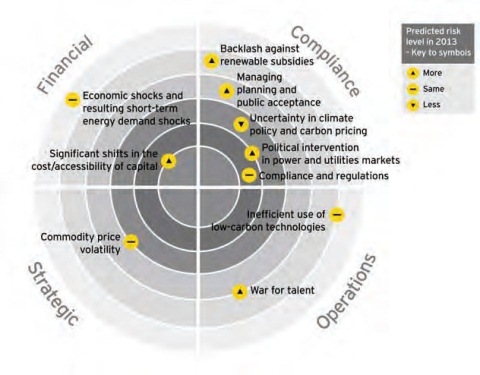 Risks identified by an Ernst and Young report in 2013 relating to the electricity utilities sector.

As one CEO at the African Utilities Week forum pointed out in response, a fundamental in business is to have control of cash flows. If a company does not have this control, which is often the nature of the electricity supply sector, the investment becomes risky. Unlike other businesses it is hard to pack up a power station and move to a more favourable environment, and the investment and return timeframes are typically long. It results in investors wanting guarantees, as most of the risks are seen to be political.

Another member of the CEO forum pointed out that perhaps regional power pools will reduce risks. “If regions in Africa put together plans and match plants, they could put down guarantees as a block of countries and diminish political risks associated with any single country.” A counter argument was that while development financial institutions might strongly favour such an approach, private investors might run a mile as they want ownership of the projects.

Further discussion illuminated the fact that the issue does not come down to a shortage of available capital in global markets. It is more a question of achieving success by packaging projects to the right type of investor, and matching investors with projects. A problem that does tend to occur in Africa is that a project is announced and then everyone comes and talks, whereas more thought should be given to how does the different projects are packaged.

But is not just packaging: it is a question of how to make projects bankable or find projects that are bankable. As is well known, Inga’s hydroelectric potential in the Democratic Republic of the Congo (DRC) could have solved many of the electricity generation problems the continent faces, if it had been invested in. The question is how African governments and utilities can give the guarantees people want. Another facet to the issue is that if people keep looking at only the risks they will miss the opportunities. 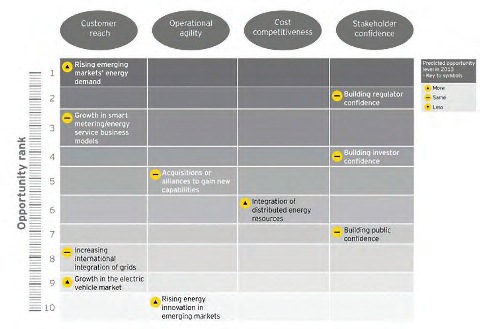 Opportunities identified by a 2013 Ernst and Young report relating to the electricity utilities sector.

The Ernst and Young power and utilities report also looked at 10 opportunities, and apart from the rising emerging markets’ energy demand, it identified acquisitions and alliances to gain new capacities as an opportunity. Other opportunities are the growth in ancillary services markets, integration of distributed energy resources, and improving offshore wind supply chain efficiency.

Some of these, such as the growth in ancillary services markets, will not resonate as strongly in Africa, nor will the integration of distributed energy resources outside South Africa and maybe only one or two other countries on the continent. Offshore wind is certainly not a current topic in Africa. Another opportunity identified that appears to apply more to other parts of the world is associated with companies in the sector enhancing relationships with external regulatory and compliance bodies. In Africa, many countries have only recently put in or are putting into place regulators and in many of the continent’s countries the overlap between government owned utilities, regulators and policy makers is still one that needs to be more clearly demarcated. Thus independence of regulators from political interests is a more pertinent issue in Africa.

However, the opportunity mentioned in the report related to rising energy innovation in emerging markets will resonate, particularly as this is a trend expected to strengthen. Another that will resonate is the opportunity associated with increased investment in generation capacity and delivery infrastructure in emerging markets. It is not only vendors, but utilities in other parts of the world and even from South Africa that see opportunity in investing in African power utilities.

Overall, while risks and opportunities will continue to exist, the underlying tide is one whereby after decades of stagnation and of minimal activity, things are finally on the move in Africa’s electricity sector. The continent needs to build much more capacity than it has; there is also a need to increase access and reduce losses on existing networks.

There appears to be a serious move to look at more varied and innovative methods in which such projects can be financed and brought about. South Africa’s well-structured renewables independent power producer programme is one such; Nigeria’s privatisation drive is another. The power pooling possibilities in East Africa is yet another with key transmission link projects achieving closure. These are just examples. Numerous countries across Africa are pursuing their own initiatives to ensure that power infrastructure development happens. There will be failures, but the overarching pressure for development will ensure there will be many successes too.