8 October 2012 – The UK has huge potential for marine power and is considered the most attractive destination to develop marine projects in Europe. A report by GlobalData says that the marine energy industry is in the emerging stages of development, and the UK is home to the R&D resources needed to further develop these power generation technologies.

Energy from the ocean could play a vital role in the UK’s ambition to achieve an 80% cut in carbon emissions by 2050, with the UK government setting a target to develop 2,000 MW of marine installed capacity by 2020. It was estimated by the country’s department of energy and climate change that the country has wave energy potential of about 50 terawatt-hours(TWh) a year and tidal energy potential of approximately 17 TWh/year, which represents a 50% share of Europe’s marine potential.

Thanks to this capacity, the UK has become a hub for marine research centres and leading marine energy companies, and boasts the world’s second largest tidal range in the Severn Estuary. The country is testing a large number of wave and tidal technologies with the support of the European Marine Energy Centre, which has 14 full-scale testing berths in the Orkneys region. As a result of this, the UK is heading the innovation race in marine energy technology, boasting the highest number of projects in a single country currently being actively demonstrated.

The UK Marine Energy Program, established in 2011, focuses on augmenting the research, development and deployment ability of tidal and wave energy devices. The program acts as a supporting pillar in the industry, dealing with issues related to planning and consent of projects, and forming a network for the sharing of marine intelligence. The Scottish government is also playing a major role in the development of the UK’s marine energy industry, introducing a number of schemes to harness the energy found in some of world’s strongest tides in the northern part of Scotland.

To promote renewable energy and attain an ambitious carbon emissions cut, the UK has introduced the Renewables Obligation Order, which requires electricity providers to supply a certain quota of electricity produced from renewable sources. Electricity providers are issued Renewable Obligation Certificates (ROC) for every MWh of electricity produced from renewable energy sources, and the government provides certain technologies with more than one ROC per MWh of generation in order to increase support for emerging, higher risk technologies. Power generated from wave, tidal stream, or tidal barrage sources receive two ROCs per MWh, while an enhanced tidal stream source receives three ROCs per MWh and enhanced wave sources receive five ROCs per MWh generated. The UK government is therefore putting its money where its mouth is, and encouraging marine energy generation. 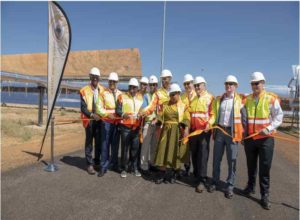