After its design, manufacture and supply of four customised 60 MVA 12/132 kV power transformers as replacements for the original units in the City of Cape Town’s 180 MW Steenbras pumpedstorage power station near Gordon’s Bay, Actom Power Transformers is wellplaced to provide power transformers for power generation of all kinds.

“Our experience with designing and producing the replacement power transformers for Steenbras, as well as the 110/55/55 MVA unit transformers we have recently been contracted to produce for Eskom’s new Kusile coalfired power station in Mpumalanga, places us in a strong position to provide power transformers for the full range of power generation applications, including the substantial wind farm project that Eskom plans to embark upon in the near future,” Ronnie Russell, the company’s general manager, says.

Actom Power Transformers has been diversifying into manufacture of power transformers for power generation applications since completing an upgrade and expansion of its Wadeville, Germiston plant in 2007, which extended its product capacity to an upper limit of 160 MVA at 132 kV, from its previous limit of 45 MVA at 132 kV. 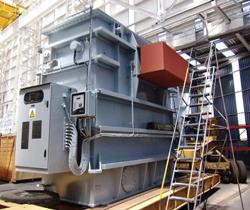 One of the 60 MVA power transformers on a lowbed trailer ready for delivery to Cape Town’s 180 MW Steenbras pumped storage power station.

The last two of the four replacement power transformers for Steenbras power station were delivered to site in April this year, following delivery of the first two in July last year and February this year respectively.

“What is particularly impressive about these conservatively designed units is that their performance capabilities are well in excess of the required specifications. The tests that have been done on them confirm that they have a 10% higher power capacity than specified,” Russell says.

Fibre optic sensors were fitted at appropriate positions on the core and windings to measure hot spot temperature locations which would yield accurate results. This modern practice was incorporated into the specification by Element Consulting Engineers and the strategic positioning of these sensors was agreed upon between Actom and Element Consulting Engineers. The loading of the transformer can be more accurately controlled thermally, which results in an increased lifespan.

The additional power capacity, effectively raised from 60 MVA to 66 MVA, results from the temperature rise tests that were conducted on them, which showed that they have the capacity to operate considerably cooler than specified. The transformers incorporate oil-forced and air-forced equipment for cooling.

“The improved cooling effectively raises the power capacity and therefore the transformers could be overloaded by 10% without any detrimental effect to them. In addition, as a direct consequence of this, the life of each of the transformers is extended by about 10 years to more than 40 years, rather than plus-30 years that is the accepted norm,” Russell says.

“Furthermore, apart from the units being more efficient than specified, the cost of operating them will be considerably reduced compared with the originally specified performance requirements, due to the low load and no-load losses, as established in the tests that were conducted in the test facility at our plant, which were witnessed by the customer.”

The transformers were ordered in early 2009 by Consolidated Power Projects (CONCO) of Midrand, the electrical project management company contracted by the City of Cape Town’s Electricity Services Department to procure, install and commission them in place of the existing 55 MVA units, which were supplied by GEC Alsthom when the power station was built more than 30 years ago.