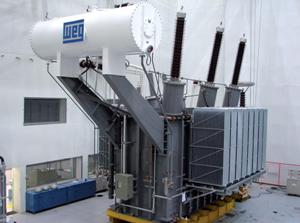 One of the WEG transformers
being supplied to NamPower

Huge growth in Namibia in the uranium industry has led to demand for power and seen the Namibian Power Corporation (NamPower) undertake projects to upgrade its transmission network. This saw the supply of nine WEG transformers by Zest to NamPower.

The final two transformers are 120 MVA 22/132/33 kV units which will be delivered and installed at NamPower’s Otjikoto transmission station near Tsumeb. They are intended to supply power to the new Ohorongo cement factory and to enhance power supply to the far northern regions of Namibia. These two transformers were recently witness tested under full load conditions by NamPower representatives at WEG’s facility in Brazil.

The first 160 MVA unit destined for the Van Eck power station weighs 100 tonnes and was rigged into position easily. Considerable planning was done prior to installation since Van Eck is a working power station and downtime had to be carefully minimised.

Both the 160 MVA and the two 120 MVA transformers are fitted with the Sergi transformer protector. In the event of a transformer short circuit, the protector is activated within milliseconds by the first dynamic pressure peak of the shock wave. This prevents transformer explosions before static pressure increases, thus saving equipment and buildings. It also facilitates a very quick internal repair of the transformer, thus sharply reducing plant outages.

Manufactured in France, the Sergi equipment was shipped to WEG in Brazil to be fitted and tested. The complete unit was then shipped directly to Walvis Bay and subsequently transported to its final destination by road.

Important features on the WEG transformer include the design of the lockable offload tap changer which is conveniently positioned within the operator’s reach and which also enhances safety and durability. An innovative pressure-relief device channels oil away from the transformer into the pit, avoiding contact with personnel and thus preventing contamination. A further feature is the in-house developed corrosion resistant paint which enables the WEG range of transformers to operate in the most aggressive environmental conditions.