Even the largest power station will not operate without batteries. In fact, the larger the power station, the more critical the function of these batteries, required to properly control and protect the electrical equipment. 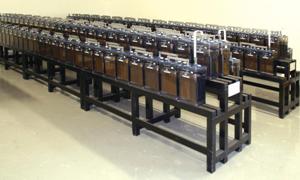 Batteries used at a power station.

Lead acid batteries play a vital role in the generation and consistent distribution of electricity on the grid. When a power plant is offline, it’s the batteries’ role to provide power for the mission critical hardware required to bring the facility back online. When the power is on, the batteries are necessary to enable the shifting and control of power on the grid.

Modern day power stations use many sophisticated control systems to ensure the safe and optimal operation of the large water cooling and feed pumps, high pressure boilers, large steam turbines driving sophisticated generators, high voltage transformers and switchgear, and many auxiliary services. These control systems are critical to the sustained integrity of the power generating function, and their malfunction due to a loss of power during operation can be catastrophic to the generator.

Uninterruptible power supplies using specialised back up batteries are used to keep these control systems powered up and operational at all times, and for long enough for the system to be shut down safely, if required. A typical power station of the size used in South Africa requires substantial battery power: in terms of weight, a few hundred tonnes.

First National Battery (FNB), manufacturer and distributor of lead acid batteries in South Africa and a subsidiary of JSE listed Metair Investments, has for many decades been a major manufacturer of these specialised batteries for both local as well as overseas power stations. FNB has been supplying South Africa’s largest power utility with Planté and flat plate batteries for over 40 years.

These batteries are purpose manufactured in low volumes to specific standards. And their lifespan is also much longer, up to 25 years depending on use.