5 April 2012 – On the 4th of April mining group Exxaro and Tata Power announced the launch of Cennergi, a new energy company which will serve the markets in South Africa, Namibia and Botswana.

Cennergi, which is based in South Africa is a 50:50 joint venture between Exxaro Resources and Tata Power Company of India, through its subsidiary Khopoli Investments. This new company will focus on the investigation of feasibility, development, ownership, operation, maintenance, acquisition and management of electricity generation projects in South Africa, Botswana and Namibia. The initial project pipeline focuses on renewable energy projects in Southern Africa and Cennergi’ s strategy is to create a balanced portfolio of generation assets.

Thomas Garner the CEO of Cennergi says the group has an aspirational target of 16 GW of installed capacity by 2025. This visualises a mix of coal (15%), gas (40%) and renewables (45%). He says the aim is for the grid emissions factor of the company to be 0.3 to 0.5 tonnes of CO2/MW, compared to a regional figure of 1.0 tonnes/MW or higher.

Cennergi, which was formed on the 2nd of March 2012 made submissions during South Africa’s second renewables bidding window. It is looking to develop two solar projects totalling 40 MW and three wind projects totalling 274 MW. It also submitted information on some hydroelectric projects it is hoping to develop in KwaZulu-Natal and the Eastern Cape for the recent RFI call by the South African government for baseload and cogeneration capacity that could be available by 2019.

The Thabametsi project whereby Exxaro is looking to develop an IPP coal fired power station in the Waterberg, does not form part of the Cennergi venture. Tata Power and Exxaro both excluded certain projects in their existing portfolios from the new venture.

Globally Tata Power has 5.3 GW of generation capacity in its portfolio and supplies power to 1.7 million customers in Deli and Mumbai. The Tata group overall is a US$100 billion company and employs 400,000 people worldwide. It is the largest employer in the UK. The South African based Exxaro group is the biggest supplier of coal to Eskom. 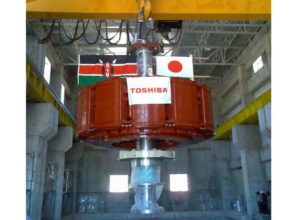