Steaming ahead in East Africa – Geothermal development along the rift valley

In parts of East Africa, an energy revolution is taking place, which will provide clean, sustainable, base load power to the people of the region. This clean power revolution is being driven by KenGen, the Geothermal Development Company (GDC) and the Government of Kenya and is taking the form of an initiative to develop and promote geothermal power within the region, and in Kenya in particular.

As part of the Kenyan Updated Least Cost Power Generation Plan, 2011 – 2030, geothermal power has been classified as the “most promising indigenous resource for power development in Kenya”.

With 14 prospect sites – Suswa, Longonot, Olkaria, Eburru, Menengai, Arus-Bogoria, Lake Baringo, Korosi, Paka, Lake Magadi, Badlands, Silali, Emuruangogolak, Namarunu and Barrier – Kenya has an estimated 5,000 – 10,000 MW of generation capacity available at these locations1. Immediate plans are for the development of some 5,000 MW of power from geothermal by 2030. 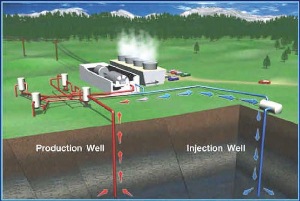 DEFINING THE CONCEPT
According to the Geothermal Energy Association, geothermal energy can be defined as “heat from the Earth”.

There are three primary designs for geothermal power plants, all of which pull hot water and steam from the ground, use it, and then return it as warm water to prolong the life of the heat source.

The choice of which design to use is determined by the resource. If the water comes out of the well as steam, it can be used directly, as in the first design. If it is hot water of a high enough temperature, a flash system can be used, otherwise it must go through a heat exchanger.

The three types of geothermal generation are shown in the schematics above.
From left to right they represent 1. Dry steam; 2. Flash steam; 3. Binary generation

FUNDING THE STEAM
The development of the geothermal resource in Kenya has been mandated to the GDC, a special purpose vehicle that has developed a strategy for resource identification and verification, which addresses the most costly part of geothermal implementation.

The most expensive component of any geothermal project is the upfront cost of exploration. With a prospecting success rate of between 10% and 40%, and a drilling cost of between €20 – 28 million for a 5 MW well capacity in Germany, initial capital outlay – which accounts for almost 50% of the project cost – is significantly higher than that of other renewable energy sources.

“If you are off by 200 feet, you can miss it. That is the nature of these reservoirs. They are much more capricious,” said John Louie, a professor of geophysics at the University of Nevada Reno. “There are still a number of dry holes or colder-than-expected [wells].

Drilling risk is still perceived as the highest risk element.” Drilling costs are estimated to be between $650 and $1200 per meter drilled in East Africa, depending on the circumference of the well4. Drilling costs also vary depending on remoteness of location and because of a shortage of locally available equipment and specialised drilling knowledge.

Current estimates are that the development of 5,000 MW of geothermal energy in Kenya will cost in excess of $18 billion. It is anticipated that $6 billion of that will be raised by the GDC, with the remainder being raised by KenGen and various IPPs for power plant installation. The majority of the cost to the GDC will be around exploration and confirmation of the geothermal resources, which is also the most risky part of the project. Because of the high-risk exposure, most investors are reluctant to get involved in geothermal development at this stage of the project. However, once the resource is confirmed, bringing partners on board for the final development is significantly easier.

Estimates from GDC are that a green field development will require about $100 million to explore and appraise. This amount includes feasibility studies, provision of access roads, drilling water reticulation system and about 10 exploration and appraisal wells. To date, the government has provided $399 million towards the ongoing projects.5

Tariff structures for geothermal have been priced to afford reasonable return to the private investors, and adequate funds for the government entities. With the price of steam expected to be in the region of 3.5 US cents per kWh it is anticipated total generation cost will range between 7 – 10 US cents per kWh. 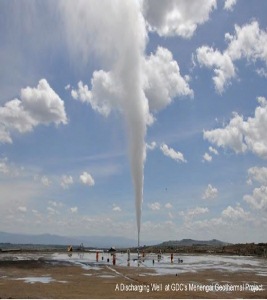 In order to avoid being dependent on the government for long term exploration and appraisal, the GDC has been designed to become self sustaining through the sale of steam – and of the estimated $2.57 billion required over the next 10 years, $1.52 billion will accrue from revenues. The GDC will be expected to raise the balance of $1.05 billion in debt and budget support from the government.

GDC will also be able to tap into risk mitigation funds, such as the Geothermal Risk Mitigation Facility for East Africa (GRMF), which is hosted at the African Union and funded by KfW Entwicklungsbank (KfW). Initial funding of €50 million has been allocated for the purpose of encouraging geothermal development by co-funding surface studies and drilling projects.

Initially focused on Kenya, Rwanda, Tanzania, Ethiopia and Uganda, the GRMF has, as of April 2013, been opened to an additional six countries including Djibouti, Comoros, DRC, Eritrea, Zamiba and Burundi. The GRMF will support geothermal development by covering:

BUT IS IT ONLY ABOUT FUNDING?
At the end of the ARGeo-C4 conference, held in Nairobi in November 2012, the following key points were highlighted as key to the development of geothermal in the region: 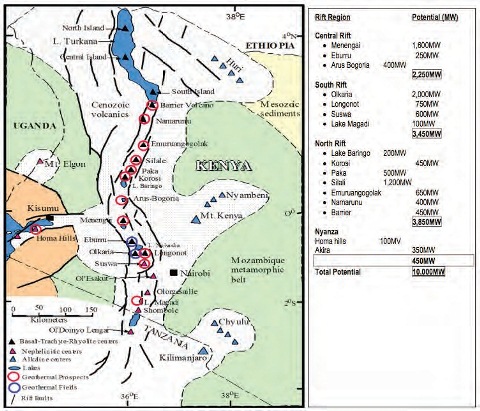 GEOTHERMAL APPLICATION IN KENYA
Geothermal efficiency and reliability is some 2 – 4 times higher than other renewable energy sources6, and the ability to use geothermal power as a base load power source is possibly the most important and significant benefit of this type of generation.

An additional benefit of geothermal energy is the scalability of the plant through technological innovation, as wells can be put to use almost immediately upon verification of the source, using wellhead units, instead of being used only as part of a larger generation plant. These units are placed next to a well, and supplied with steam or hot water. The biggest benefit from this intervention is that money can be generated from the sale of electricity fairly early into the verification of the resource, without having to have a large number of wells developed and verified. Additionally, “wellhead generators negate the needs of traditional power plants for well redundancy or an excess steam buffer to cater for well failures and allows all wells to be utilised”.8

Interestingly enough, it has been proposed that wellhead generators are used to supplement or replace diesel generators, which are traditionally used to power the drilling rig. At the Menengai 3 and 4 drill sites, more than $1.2 million has been used for diesel generation (about a quarter of the total drilling cost) to power the rig. By connecting wells 3 and 4 to wellhead generators, it is proposed this cost can be mitigated for any additional drilling that needs to take place.

“The fundamental problem is lack of adequate development expertise to bring these very challenging projects to a bankable state such that you can attract international debt and equity. These projects are hard to do and horribly complex, with a long, long, long development curve. You need a lead developer with the ability to take on a lot of soft cost exposure for a long time to get these projects to the point where international equity and debt are going to come in.”

With government driving and offering security for the initiative and promoting special purpose vehicles such as the GDC for the development of geothermal resources, the future for Kenya’s geothermal power sector is looking particularly bright.