Maputo, Mozambique — ESI-AFRICA.COM — 17 October 2011 – Three new 500-kilowatt photovoltaic power stations are to be built in the districts of Muembe, Mecula and Mavago, in Mozambique’s northern province of Niassa, to provide electricity for about 50,000 people.

The Mozambique News Agency AIM reports that the governments of Mozambique and South Korea have signed a loan agreement to cover the US$35 million cost of constructing the power stations. Construction will commence after the agreement is ratified by the Mozambican Council of Ministers.

The loan from the Export-Import Bank of South Korea will be on concessional terms over a 40 year period, including a 15 year grace period, with an interest rate of 0.01%.

According to the chairperson of the National Energy Fund (FUNAE), Miquelina Menezes, solar energy provides electricity to 2.8 million people in Mozambique, representing 19% of those with access to electricity.

Currently 102 of the country’s 128 districts are linked to the national grid, based on power from the Cahora Bassa dam on the Zambezi River. It is planned that all districts will be connected by 2014.

For areas that are not on the grid, the government is expanding the provision of solar power. 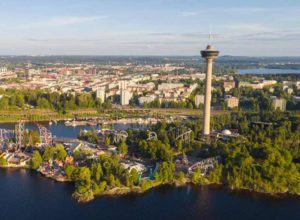 Bioenergy and nuclear, identified to drive the energy transition