Swiss invention Solar Impulse II set off on its first around the world journey this morning, taking off from the Al Bateen Executive Airport in Abu Dhabi. This project was initiated to demonstrate how innovation and clean technologies can change the world.

Swiss pilot and CEO of long-range solar-powered aircraft project Solar Impulse Andre Borschberg will be flying the solar-powered plan for 12 hours before landing at the first stop in Muscat in the Sultanate of Oman.

Co-pilot and chairman of the Swiss company Bertrand Piccard will meet Borschberg to continue the next leg of the trip as solar-powered planes can only hold one pilot at a time.

About the Solar Impulse II plane 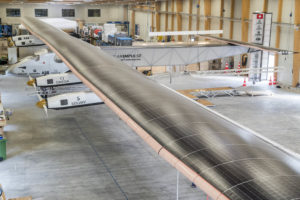 The carbon-fiber plane can reach a maximum speed of 140km per hour and has a wingspan of 72 meters, wider than a Boeing 747 and only weighing 5,000 pounds, the same weight as a car.

The wings, tail and fuselage of the plane are fitted with 17,249 solar cells. There are four lithium polymer batteries on board, storing enough power for peaking demand and flying through the night.

The Solar Impulse II also has four 17-horsepower electric motors that propel the plane through the air.

This system is expected to carry the plane for a full seven days and nights without stopping. The plane will ascend to heights of 28,000 feet by day and descend to 5,000 feet by night to ensure that optimal energy efficiency is met.

The cockpit is fitted with a single seat, which reclines for the pilot to rest, as well as having a built-in toilet. There are oxygen, food and water reserves on board.

Currently the plane is running in mode 1, which means that both the storage battery and the sun are fuelling the plan as it gains momentum.

Borschberg has not taken any rest stops nor has he tapped into any of the food and water reserves on board, according to a live feed coming from the plane. The planes journey can be tracked live through the Solar Impulse website.

Solar Impulse II’s around-the-world journey started in Abu Dhabi and will take the plane east towards Oman where it will make its first stop in Muskat.

The next leg of the journey will be to Ahmedabad and Varanasi, India. The plane will continue its trip to Mandalay, Myanmar, and Chongquing and Nanjing in China.

After crossing the Pacific, the plane will land in Hawaii before flying off to Phoenix, the Midwest and New York. From New York, Solar Impulse II will fly across the Atlantic and land in North Africa before making its way back to Abu Dhabi.