Users will be able to plot potential sites on a mapping interface; design a plant, while adjusting configurations to maximise energy output; and generate a report that includes site-specific estimated capacity and energy yield, while factoring in irradiation levels, average temperatures, and project construction timing.

Users have the option of changing the estimated price at which they would produce power, as well as the estimated costs of the plant and estimated revenue generated over a specified timeframe.

During an online demonstration it was stated that the tool was developed for project planners and developers, as well as governments and students, as a means to assess the solar energy potential of an area of land anywhere in the world.

First Solar power plant system’s global manager, David Spieldenner, explained that the tool aimed to provide those interested in solar power with a user-friendly and free means of estimating the potential for solar in their region.

By way of an interactive map, users draw polygons over the area of land that represents the ground-mounted solar PV power field they would like to develop. The tool calculates the probable power output of the solar fields, based on the surface area and historical weather data for that part of the world. In addition the tool also calculates the estimated cost. 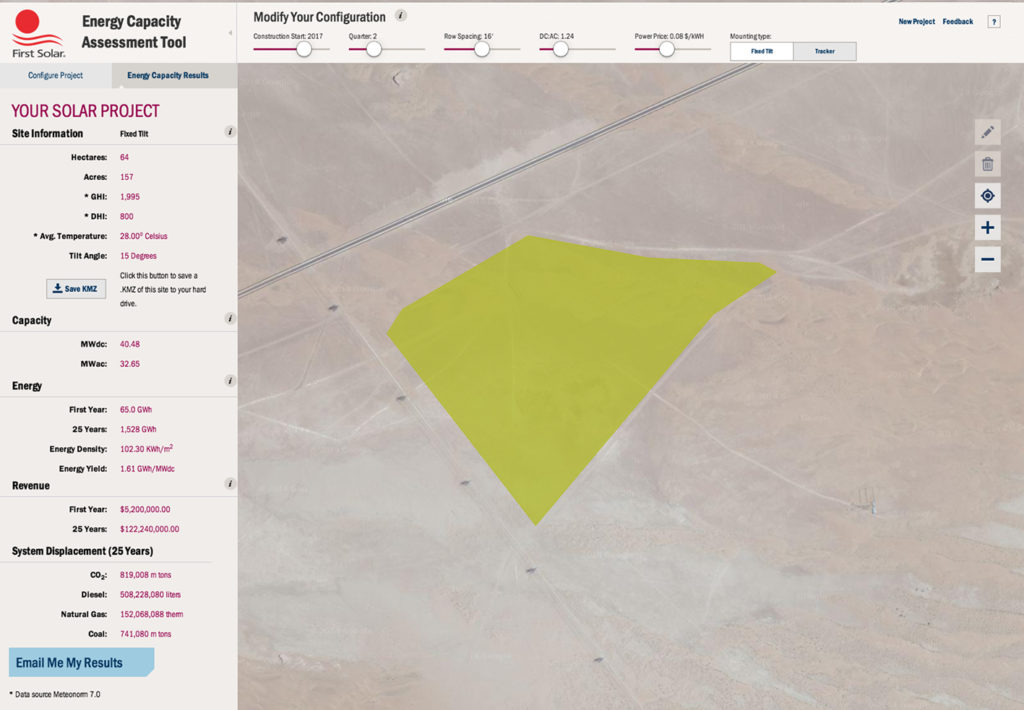 In addition, there is opportunity for municipal officers and town planners to utilise the tool for solar resource planning in their jurisdiction and gauging the potential energy output along with the resulting reduction in carbon emissions.

‘The tool uses a familiar and intuitive interface designed with Google maps in mind making it familiar and easy to use. Anyone logged into the system can produce a report at the click of a button and can save their projects as KMZ files, which are the de facto file standard for geospatial information,’ Spieldenner stated.

The tool aggregates the power output from multiple areas, enabling planners to estimate the combined output of multiple solar power fields. However the tool does not replace detailed energy capacity assessments and is mainly a planning device.

This product allows users to change various aspects of their design to explore various options for different outcomes. These include changing the density of the rows of solar receivers, which would reduce the peak energy generated, but improve output consistency owing to the panels casting less shade over one another, or change between heliostat and fixed solar panel designs.

He continued: ‘The algorithm is very responsive however proper assessments will still be required to determine whether a site is suitable for solar as the tool is only for initial planning and not engineering purposes.’

The application can be accessed online at www.firstsolar.com/energycapacity