Freetown, Sierra Leone — ESI-AFRICA.COM — 31 May 2011 – The government of Sierra Leone has announced a planned expansion of the Bumbuna hydro-electric project that could more than quadruple the West African country’s generation capacity by 2017.

The government has signed a memorandum of understanding with Joule Africa, a member of the California-based Joule Investments Group, to add 350MW of generation capacity to the facility in the centre of the country.

The deal is expected to cost US$750 million, 75% financed by debt, the remainder by equity. It was announced by Sierra Leone deputy minister of information Sheka Tarawalie at a news conference here.

Nine years after the end of its civil war, Sierra Leone’s infrastructure remains weak and electricity supply is a problem. The country today has less than 100MW of capacity “’ one of the lowest levels, even in sub-Saharan Africa.

The first stage of the Bumbuna hydroelectric facility on the Seli River came online in 2009 after a 30-year, war-disrupted gestation. That 50MW initial stage already marked a significant improvement to the power situation in Sierra Leone, but demand still greatly outstrips supply across the country.

Even in the capital, Freetown, grid power is highly erratic. A generator is a pre-requisite for ensuring a reliable energy supply, however, recently fuel prices jumped by 30%.

The second phase at Bumbuna will increase the facility’s total output to 400MW. The project will include the construction of another reservoir to improve water supply to turbines during the dry season. 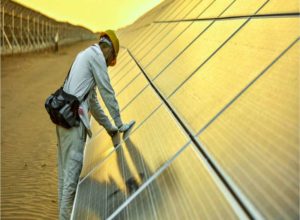