Eskom’s 100 MW Sere wind farm project is under construction in a good wind resource area at Skaapvlei Farm within the Matzikama municipality, in the Western Cape, South Africa. The project is funded by a group of development finance institutions, including the World Bank, African Development Bank, Clean Technology Fund and Agence Francaise de Developpement.

Eskom’s Sere wind farm will comprise 46 Siemens 2.3-108 wind turbine generators. The project includes construction of a new substation and a 132 kV distribution line. It will create about up to 335 direct jobs during the peak of the construction phase. It has an expected operating life of 20 years, with average annual energy production of about 298,000 MWh, enough to supply about 124,000 standard homes.

In July 2013 the excavations for the foundations for the wind turbines and a number of other foundations were at various stages of completion. Almost 33 tonnes of steel reinforcing needs to be put in place first, and then the concrete is poured. On 25 September 2013 Eskom took another step towards harvesting wind energy when the concrete of the first of the 46 foundations was poured at the site. Nine mixer trucks unloaded almost 420 m3 of concrete to cast the 20 m diameter conical foundation.

In October 2013, the wind turbines blades and other components for the Sere wind farm began arriving at the Saldanha Bay. The turbine components are now being transported to site. The first wind turbine was erected on 2nd of December 2013 and signified the achievement of a major milestone on the project.

In addition to the Sere project, Eskom has a 100 MW Concentrating Solar Plant (CSP) project in development near Upington in the Northern Cape, which also has funding from development finance institutions. It has also installed solar photo-voltaic panels to provide auxiliary power at its head office and at two of its coal-fired power stations, with a view to rolling out solar PV across other facilities. 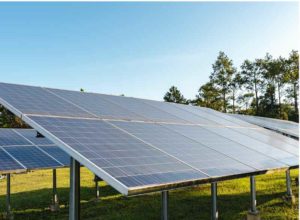