FG Emvelo, a joint venture between FG.de, a German group of companies and Emvelo Projects, a pan-African company, with headquarters in Johannesburg, recently acquired a 340 km2 site with high direct normal irradiance (DNI). The plants will use the ABB-Novatec Solar turnkey concept for CSP plants which reduces the need for land by 40% and water consumption by 80%.
Novatec Solar is a German CSP technology company in which ABB recently acquired a 35% stake.

The efficiency is achieved through a patented solar boiler for direct steam generation based on linear Fresnel technology. The collectors use flat glass mirrors to reflect solar energy onto a receiver in which water is vaporised directly to produce superheated steam at temperatures of up to 500°C. The direct steam technology operates without thermo oil or any other toxic heat transfer medium. Differentiating benefits of the concept include the automated mass production of key components in local production facilities, a fast and accurate assembly process and a robotic cleaning system that uses very little water. 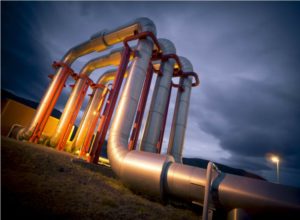