Making this statement in an interview here, Sustainable Energy Society of Southern Africa (SESSA) brand ambassador Irvan Damon added that in further entrenching its green agenda, South Africa was committed to reducing carbon emissions by 34% by 2020. “To this end, energy supplier Eskom has also pro-actively committed to reducing its reliance on coal as a primary energy-generating source,” he pointed out.

According to Damon, the power infrastructure in South Africa could do with a greater energy mix from renewable sources, contributing to greater grid stability and energy security. “Where the grid is not able to reach deep rural areas, off-grid options like solar water heating, wind and PV became more viable,” he added.

The government is working together with the private sector to bring South Africa’s electricity supply and distribution system back into balance, he pointed out. With master policy-frameworks like the Integrated Resource Plan, mapping out the DNA of our energy matrix for the next two decades or so, government had made huge progress towards embracing a more positive and greener energy landscape, Damon said.

“At the same time, the importance of reducing demand by pricing electricity correctly, as well as promoting energy efficiency and deterring, and if necessary outlawing, energy inefficiency, could also feature in the near future,” Damon suggested. “At the moment the energy climate in South Africa is looking optimistic, with government creating the policy and the investment climate largely favourable for existing and new renewable energy players, and also encouraging energy efficiency strategies,” he stated.

“We are seeing a more pragmatic collaboration from renewable to conventional major players, in South Africa. This will also greatly assist us in reaching our 2020 emissions goal.”

Damon also noted that government had recently echoed that it wanted to create 5 million jobs in the next decade. “I believe that the renewable sector could be one of the primary drivers of achieving this outcome,” he concluded. 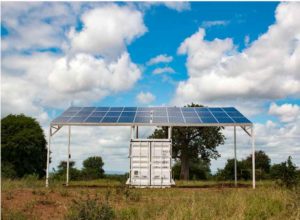