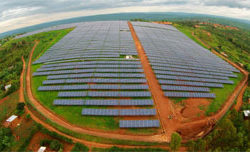 SolarServer reported that the 8.5MW Africa shaped solar power plant developed by Gigawatt Global, has successfully financed, developed and connected the $23.7million project which will generate enough power to supply a further 15 000 homes.

“The people of Rwanda should be proud to host the first utility-scale solar power plant in East Africa, and we hope that the pioneering spirit of Rwandan authorities may serve as an inspiration to other countries in the region”, Torstein Berntsen, Executive Vice President of investor company Scatec Solar ASA said.