26 September 2007 – South African minister of minerals and energy, Buyelwa Sonjica announced on Tuesday that the government has set up a subsidy and finance office to guide funding for renewable energy technologies.

The Government will also establish a new certification system to support the development of renewable energy projects and provide additional revenue. The Tradable Renewable Energy Certification System will be operational early 2008.

Renewable energy, which is set to play a major part in South Africa’s energy strategy, are often said to be too expensive in comparison to more traditional forms of power generation, as well as being “unreliable and unsightly”.

The South African government will partner with the Global Environment Facility (GEF), an organisation which helps developing countries fund projects that protect the environment, to provide technical assistance and leverage investment from the private sector.

GEF would also assist in energy market transformation projects and the implementation of a South African wind energy programme.

26 September 2007 – The South African energy policy, introduced in 1998, is under review and the process is expected to be complete by the end of 2008.

According to Sandile Nogxina, director general of the department of minerals and energy, energy objectives had to be re-examined in order to determine if they were still relevant, nine years after the introduction of the original policy.

“The question confronting us today is whether this policy position is still relevant in the face of high and volatile oil prices, the fluidity of the geopolitical environment, the abundance of our coal deposits and the need for us to ensure security of supply,” Nogxina said at an energy summit aimed at examining South Africa’s current energy policy.

At the time the white paper was drafted, the price of crude oil was below $10 a barrel, putting the long-term sustainability of synthetic fuel businesses in question he continued.

Additionally, South Africa had sufficient electricity at that time, with limited blackouts and brownouts.

“Eskom had a reserve margin of about 30%, whereas now Eskom barely meets demand, with a reserve margin around 10%. The message is loud and clear: the days of cheap electricity are over,” Nogxina told delegates.

The current review aims at identifying gaps and if necessary, setting new objectives. 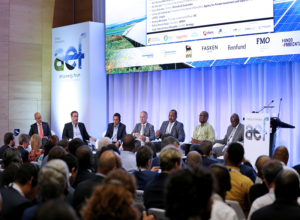