With South Africa’s energy crisis worsening at a rapid rate and demand to double by 2030, this facility could not have come at a better time. Solutions to reduce and eradicate the many problems within the sector are turning to renewable resources as their knight in shining armour.

Government is invested in driving a green economy where tax incentives and dedicated specialist departments are collaborating to finding solutions to the challenges which face the energy mix. These sentiments resulted in an Integrated Resource Plan which looks at the next 20 years of electricity production and demand. The plan aims to have 42 percent of total power generation supplied from renewable resources, the statement said. 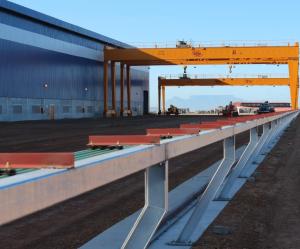 GRI hopes to reach optimal production in the next 18 months where local content has been given great consideration.

The community of Atlantis will have 200 residents employed at the factory where skills training will be given over a two year period by international technical experts.

The statement said that ‘this is the first investment that the City of Cape Town has attracted through its pilot Investment Incentive Scheme in Atlantis, and is testament to the City’s emphasis on partnerships to make progress possible’.

‘Not only will this investment offer a realistic solution to the current fragile power situation, but we will be deploying and sharing our know-how with the local market and at the same time generating additional job creation opportunities. We see a bright future for South African-developed renewable energy, both locally and also in Africa, not just as users but suppliers as well’, Imaz concluded.

The factory is located in the Green Technology Industrial Park in Atlantis, stretching over 12 000 m².

Standing true to its testament, the facility is not only a producer of green energy technology, but it makes use of energy efficient technologies in the production process too.

Once the product reaches completion it can be stored on site in the 350m factory.