The Algerian government has postponed plans to explore shale gas reserves until 2022, this after it had announced a US$70 billion investment in shale gas technology in early January.

The announcement comes as a result of those residents who could potentially be affected by the process, protesting that the government does not have their best interests at heart, rather a decision to benefit Algeria’s top brass. 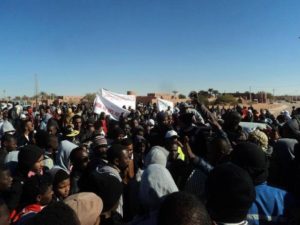 ‘Between shale gas and water, the Algerian people will choose water; you think the Algerian state would be crazy enough to endanger the lives of its citizens?’, Sellal asked.

An expert on Algeria, Geoff D Porter, said that these ‘unique’ protests were potentially causing more harm than good, as the decision to halt shale gas exploration could impact on economic growth—

Algeria depends heavily on crude oil as its dominant export product which has hit a six year low.

According to Porter, the government is aware of the dire situation it may be in should it completely eradicate shale gas plans.

‘President Abdelaziz Bouteflika will strive to strike a balance, likely pledging to dedicate more resources to southern Algeria’s social and economic development…while making plans to move ahead with shale gas exploitation’, he said.