Coal-dependent electricity provider Eskom has the weight of South Africa’s carbon emissions on its shoulders. Internationally, 36% of the world’s electricity is generated by coal, but in South Africa and Poland the figures are 91% and 92% respectively. For years, South Africa’s national electricity provider Eskom has pursued a policy of providing cheap, coal-powered electricity in order to support economic growth. Eskom has recently begun to calculate its greenhouse gas emissions, however. According to its 2007 annual report, released in July, the utility generated 208 million tonnes of CO2 equivalent over the past year, making Eskom the largest emitter of greenhouse gases on the African continent. Its emissions equate to approximately half of South Africa’s total.

The country’s main coal producers include BHP Billiton, AngloCoal and South African companies Sasol Coal and Exxaro, the largest black-owned coal miner. Some of them have signed long-term contracts to supply Eskom with coal for years into the future. In total, the mining companies produce just under a quarter of a billion tonnes annually, making South Africa the fifth largest producer of coal in the world.

SHOULD THE CARBON BUCK STOP WITH ESKOM?
According to its 2007 report, Eskom remains wedded to coal for the foreseeable future. Its only shareholder – the South African government – is now left considering how to reconcile its domestic policies to encourage growth with the international commitments it will be pressured to make to curb emissions post-2012.

The government’s current renewable energy targets currently stand at a modest 2% of electricity demand by 2012. Eskom’s continued reliance on coal is being perpetuated through long-term contracts with coal mining companies such as Exxarro. In July, the two companies were in negotiations to seal a new coal-supply deal for the second phase of Eskom’s new 250 000 megawatt power station, in Limpopo, South Africa’s northernmost province.

FUNDING RENEWABLES
Eskom has committed R3 million (around US$416 000) per year for three years to renewable energy research, in a joint initiative with the World Wildlife Fund for Nature. This partnership seems like a token effort compared with the renewable energy projects being set up by Electrobras, however, the state electricity company in fellow emerging economy Brazil, which aims to raise the share of renewables from 3.5% to 6% of the nation’s electric energy mix. Electrobras’s plans are funded under the United Nations Clean Development Mechanism (CDM), which was set up to facilitate investment in projects in developing countries that reduce emissions.

According to a report by the UN Industrial Development Organisation, there exists in South Africa’s energy sector a large potential for CDM projects, but to date only nine projects have been registered by the CDM Executive Board in South Africa, compared with Brazil’s 220 projects. In its 2007 report, Eskom reasons that — despite being keen to engage in market-based mechanisms — it is wise to wait for more certainty in the post-2012 carbon-trading market before becoming fully involved.

The South African electricity company is a member of the 3C Initiative, headed by Swedish energy company Vattenfall, a lobby group demanding a post-Kyoto global framework supporting a market-based solution to climate change. Those looking for immediate investment in renewables are left pinning their hopes on Valli Moosa, president of the World Conservation Union (IUCN) and former minister of the environment, who has been chairman of the Eskom board of directors since 2003.

Under his watch, there are already indications that a 100 megawatt wind farm project, the plans for which have languished long on Eskom’s project shelf, may get the go-ahead during 2007. Only one wind farm, situated on the outskirts of Cape Town, so far exists in South Africa and it was set up independently of Eskom.

The most advanced clean coal technology option currently being investigated by Eskom is underground coal gasification (UCG), currently the subject of a pilot plant study at Majuba power station. UCG involves converting underground coal in situ into a combustible gas, which can be used as a fuel for generating power. The coal is ignited in a cavity underground and combustion maintained by means of oxygen and/or steam injected through boreholes, creating pressurised gas, which can be tapped. The technology has the advantage of obviating the need for mining, processing and transporting the coal, and also avoids the transportation and disposal of ash. When the UCG pilot project will be completed is not yet known, however.

INCREASING ENERGY DEMAND
South Africa’s current positive economic growth, driven in part by the commodities boom, places Eskom in a quandary. It claims to be investigating ways of including renewables in the energy mix, but it does so against a background of a large-scale backlog of electricity for basic consumption. In response to this energy crisis, Eskom has demonstrated a narrow range of practical ways in which demand-side management could contribute to achieving both goals at a household level.

By handing out free low-energy lightbulbs to low-income households in the Western Cape, the utility not only brought down peak loads, but also structurally reduced its electricity consumption and thus expenses.

Similarly, its efforts to educate more affluent consumers to shift the use of pool pumps, washing machines and dishwashers away from peak load periods has resulted in the dual benefit at individual household level of reducing demand and energy expenditure.

Through a variety of projects completed in 2006, Eskom claims that emissions equivalent to 271,000 tonnes of CO2 were avoided, but this was against the backdrop of its total emissions: 203million tonnes of CO2 equivalent, up from 197.6 million in 2005. 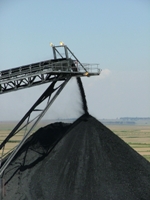 SOLAR SOLUTIONS ARE OBVIOUS
In February 2007, Eskom also announced that it was working on plans to offer South African households and businesses an incentive to install solar water heaters. Andrew Etzinger, Eskom’s general manager for investment strategy, says that solar water heating is a priority for the company, which plans to roll it out on a large scale. Households account for approximately 33% of Eskom’s demand, with the biggest electricity usage coming from heating water in conventional water heaters.

A pilot project during 2006/7 has revealed that solar water heater installation can cut between 30% and 50% from water-heating bills, often saving households hundreds of rands a month. Irrespective of the personal savings, there are substantial CO2 emission implications. The installation of 120,000 to 150,000 of such units – which cost about R8 000 each – would eliminate the need to build another conventional ‘six-pack’ coal-fired Eskom power station.

Etzinger says it takes approximately R3.5 million to save one megawatt, compared with R10 million to build the generating capacity for one megawatt – but the hurdles to installing that many solar water heaters are substantial. It costs slightly more to install a solar water heater than a conventional geyser and in addition there is likely to be underlying political opposition from municipalities – the surcharge they place on the electricity Eskom delivers is easy money.

While the South African government contributes in a variety of ways to funding research into new technologies for reducing CO2, it has not yet followed in the footsteps of the European countries providing tax breaks for businesses and households that switch to alternative energy sources such as geothermal, hydro, solar or wind. As a result, local demand for such technologies has substantially been limited. Furthermore, legal barriers currently exist to private sector investment in large-scale alternative energy generation and supply projects.

There is some hope for renewables on the horizon. The independent power company Palm Power System, a subsidiary of South African Okhela Renewable Energy Corporation (Orec), has announced it will start manufacturing 300 kV wind turbines in January and intends to supply the turbines to South African municipalities interested in developing local sources of wind power.

On the whole, however, the government has shown little willingness to legislate in favour of green energy, apart from supporting the addition of a percentage of biodiesel to motor vehicle fuel, which could provide its own problems with sustainability. Until such fiscal incentives become more widespread, and the private market for renewable energy takes off, the pressure will remain on Eskom to lead South Africa’s shift to renewables.