On 19th September, PONOVO engineer made demonstration and market promotion with L336i for the potential agent in Philippine.  The engineer instructed the software operation for the customer that are satisfied with the results. After the demo, the customers invited PONOVO taking part in the 7th Annual National Convention and Expo 2012 in Philippine. 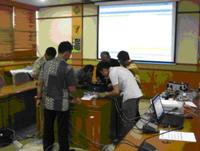