“In the background of the State Grid promoting to construct strong intelligent grid, we provide the electric power testing method for HUVDC project with our self-developed technology.” On 12th June, the related person in charge of the project in PONOVO gave comments on the domestic first DC valve converter test system—PVT1000. 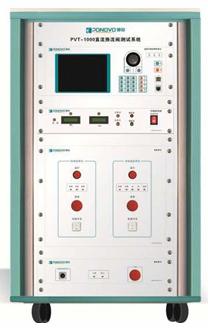 In July, 2011, the PVT1000 developed independently by PONOVO successfully passed the factory detection. On 12th December, it passed the test held by DC valve laboratory in China Electric Power Research Institute. The continuous test of one month at site showed that the equipment was high accuracy, quick test and simple operation. The pusher type structure is easy for local operation. As a result, PONOVO has become the fourth manufacturer in valve test equipment after ABB, Siemens and Alstom in the world.

The DC distribution project applied the foreign equipments mainly in DC valve convertor. The engineers used the special valve test equipments which were from foreign countries to make impedance test and low voltage trigger on the valve convertors. But the manufacturers will not publish the test principle and specifications and the equipment will not display the detailed data. By this, the engineers rely on the import valves.
As the State Grid puts great efforts on the development of valve convertor, the domestic manufacturers launch the DC valve convertor which is widely used in ±500kV Heihe Back-to-Back convertor station and ±800kV Jinping UHVDC project.

PVT1000 is mainly used in the AC/DC impedance unit, low voltage short-circuit and low voltage trigger, etc tests. There are two test models: factory test model and site test model.  It is satisfied with the requirements of electric power characteristics at site.

Besides, there are two test directions: automatic and manual. The automatic test can measure all function characteristics of the DC valve convertors safely. After test, users can analyze the test report. The manual test ensures users to make each test item independently. The test parameters are displayed in real-time which provide the direct way to analyze and judge the fault.

This invention is PONOVO’s breakthrough and remarks the top technology in the UHVDC test field.