1 October 2010 – An East London rubbish dump could hold an answer to electricity generation – all the city needs is Department of Environmental Affairs approval.

The Second Creek landfill site could become only the second in the country to adopt an environmentally friendly landfill gas conversion to electricity project.

The project will be run by AGP along with the Central Energy Fund and Carbon Reduction South Africa, and will begin once BCM have gained a waste management licence from the Department of Environmental Affairs.

“We did the feasibility tests last year and we are in the process of raising money to develop the project.

Van Wyk said the process consisted of drilling into the landfills and controlling the gas.

“It’s a 15-20m drill and we then direct the flow of the methane into a gas engine that utilises it to generate energy,” he said.

“Apart from stopping the harmful gas emissions, it gives the municipality a good source of alternative energy. It has been practised in Europe for almost 20 years.”

Design and contract engineer at eThekwini Municipality Logan Moodley said: “We harness the gas from the solid waste and channel that through engines which use the gas from the landfill as a fuel source. That gets taken into a transformer which produces electricity .”

The technology does, however, come at a cost.

“It has its constraints because capital investment is really high, but it is worth doing.

“We are getting 7.5 megawatts of electricity which is costing us in the region of R110 million,” added Moodley.

“The project is also dependent on your fuel source (gas). It’s a biological process so there comes a point where your gas will drop. We are projecting 14 years.”

Moodley added that while the gas was limited, the time factor allowed a municipality to source another area where they can extract gas.

PAC councillor in Buffalo City Costa Gazi said it was important to not only adopt the project, but extend it further.

“There is plenty of methane to be extracted from sewage.

“Can the AGP do that because we have seen sewage pumped out into the sea? That could produce not only electricity, but also produce compost,” Gazi said.

Van Wyk confirmed that methane could also be extracted from sewage. He added that once waste dried up it could also be used for fertiliser.

Manager of BCM’s integrated environmental and sustainable development programme Shirley Fergus said there was scope for that to be done and that the municipality would consider it.

“DBSA has given us money to look into sewage so that we can use that resource more effectively.” 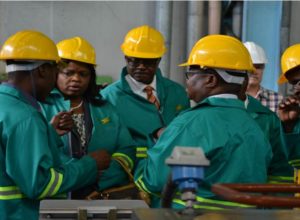