July 9th, the engineers, Mr. Wei Zhijun and Xu Menglong from PONOVO, are invited by the distributor in Malaysia to make demo on PF3000 power filter in Kuala Lumpur.
In the morning of 10th, the engineers gave training on PF3000 and introduced the advantages, unbalanced test method and operations, etc.

In the afternoon, the engineers came to the 132kV reactive power compensation substation, The reactive power compensation equipment is YY wiring connection, consists of reactor, capacitor (36 capacitors in each group) and CT. Because it is not filter, it can’t make vibration point measurement demo. The engineers temporarily decided to make unbalanced current test and R, L, C tests.

Eric introduced that the unbalanced capacitors causes the relay trip, and the engineers of the substation felt quite helpless. So the capacitor groups in the field were isolated form grid and in detection. Eric brought the tester of R, L, C (Al-6600 from Pan-China Electronic Co., LTD Jinan) to make a competition with PONOVO PF3000.

They used R, L, C tester to test capacitor, and also calculated it in the control room. PONOV engineers visited the site and drew the system map. They discussed with the staff in the substation. 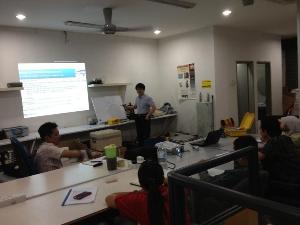 Make demo on PF3000 for the distributor

The engineers asked the CT warning setting and trip setting, etc information. According to the information provided, the engineers prepared to unbalanced current detection tests. The system was reactive power compensation system, so the capacitor group is not the H-bridge connection in China. There was no warning CT between capacitor groups. The engineers should find the central point by themselves.

After getting the central point, they started to make tests. In the first test, the unbalanced current was very large. The capacitor with unbalance rate 0.807% was unbalanced. After getting the results, they used R, L, C tester Al-6600 to detect capacitance value and calculate. Unfortunately, there was no fault in the test with Al-6600, so it couldn’t work again. So the general superintendent Mr. Ganga was invited and the engineers introduced our PF3000.

The engineers tested CB1, CB2, CY1, CY2, CR1 and CR2 and adjusted the capacitors to balanced status. They suggested to do the unbalanced current again and checked the results. After testing, the unbalanced current was about 0.544mA, and K=0.174%. Although it was not perfect, it was better than before. All of workers agreed to reclose. 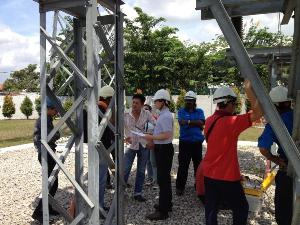 The start value was 8%, after power on, all were normal and the relay didn’t trip as expected. The compensated value in the software was 6.6%.

The engineers worked in the field for more than five hours. After the demo, Mr. Ganga was satisfied with PONOVO tester and appreciated for its help. He showed great interest in our PF3000.
This demo not only successfully helps the customers solve the actual problem, but also the first for PF3000 to debut in Southeast Asia courtiers.