Off-gas own generation project near Newcastle

A nameplate 8.0 MW own generation project that uses off-gases from an arc-furnace at SA Calcium Carbide near the town of Newcastle in KwaZulu-Natal will free up electricity for other uses in the area. A Calcium Carbide (SACC) is run by the Andina group, an Argentinian family owned company, and is the only producer of calcium carbide (CaC2) on the African continent. It produces some 72,000 tonnes a year of this product, which is used mainly in the production of acetylene gas and the desulphurisation of steel. The main inputs to the production are lime, coke and electricity. 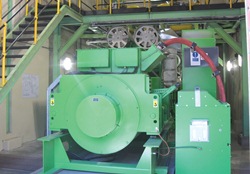 One of the four Jenbacher engines at
SA Calcium Carbide.

The company’s arc-furnace which operates at some 2,200OC has an electrical demand maximum of 50 MW, though due to the raw materials flow and the processes currently utilised by SACC a maximum of some 42 MW is applicable. The own generation project which will see the company offset some 6.0 MW of its electricity usage, features four units of 2.0 MW, each using a GE-Jenbacher special gas engine with an average capacity of some 1.7 MW per engine. How many of the engines, which cost R10 million apiece, can run at one time depends on the furnace output. It typically requires the furnace to be operating at a load of 16 MW for one engine to run, 22 MW for two, 28 MW for three, and 32 MW for four.

The internal combustion engines used for the electricity generation are specialised as the furnace gas contains some 30% hydrogen and 60% carbon monoxide (CO) by volume. Each gas engine has a 125 litre capacity. The efficiency of the power plant is some 37%, and will run as base load capacity, in line with furnace operation of about 90% availability. The project will generate some 45 million kWh a year for self-use by SACC within the local municipal grid. This represents a grid off-take reduction of some 20%, which will allow for future company growth without any demand on the constrained energy needs of the Newcastle region. 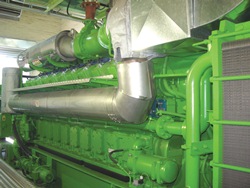 Each of the four engines installed at the
SA Calcium Carbide Newcastle facility has
a nameplate rating of 2.0 MW.

The Newcastle region uses a peak of some 100 MW to 120 MW of power and Calcium Carbide is the largest power user. Thus the project offers significant benefit to the Newcastle municipality by reducing electrical load on the grid by about 10%, which enables residential and commercial expansion in the municipal area. The Newcastle municipal area currently has an electricity access percentage of 87% and aims to achieve 100% within the next couple of years.

The reason the low calorific gas-fired spark ignition (reciprocating) Jenbacher engines used are termed special is that they are purpose built for the project and are a rarity internationally, with few similar projects in existence. Aceralia and Sama in Spain are very similar; however, the SA Calcium Carbide gas has a higher hydrogen concentration.

Off-gas is directed from the furnace through blowers and a gas scrubber plant and gas conditioning system to a generation powerhouse. The electrical power generated is fed into the local electrical grid which is re-fed for own use back to the company’s furnace. The generation powerhouse is located in close proximity to the existing rotary aggregates drying kiln into which exhaust heat from the engines is fed, hence replacing the existing use of LPG. 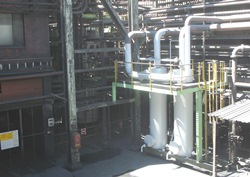 Part of the SACC plant, with the substation on the left of picture. The white piping forms some of the gas flow infrastructure associated with the own generation project.

The main technical challenges for the project arose from the gas quality. The project requires an exceptionally clean gas supply to the engines. Dust levels have to be kept low (<15 mg/Nm3). This was achieved by the installation of a second Theisen wet scrubber plant which is effective in reducing dust levels to less than 5.0 mg/Nm3. In addition, gas conditioning was a significant barrier that had to be overcome to ensure the gas relative humidity and pressure levels are maintained within tight limits for the generator sets. Furnace overpressure events have been engineered for.

Members of the project team at SACC say that the initiative was inspired by the landfill waste gas to power project undertaken in Durban. They say the company may well have undertaken the R115 million own-generation project, commissioned at the end of 2012 after a nine month construction period, even had no special funding mechanisms been available. In such a case the likely payback period would have been about eight years. The project will reduce the company’s R100 million a year electricity bill. However, the payback period will be shorter thanks to the funding mechanisms used, which do help justify it in terms of SACC’s internal rate of return (IRR). The decision to go ahead with the project was made in 2010, and the first bricks were laid in March 2012. 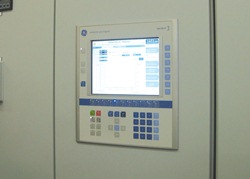 Control panel which shows one of the
SACC Jenbacher engines generating
1,450 kW.

One of the incentives that further encouraged the company to do the project is one of Eskom’s integrated demand management programme mechanisms, where funding is provided for a required 15% electricity reduction which SACC is set to achieve. In addition, the project was funded through two project loan agreements structured with the Industrial Development Corporation (IDC), namely a loan agreement and a suspensive sale agreement. The latter is for the separate purchase of the GE-Jenbacher engines. As such, SACC’s equity pay-in has been minimised. Through a partnership with the German development bank KfW, a green-energy soft loan was also facilitated by the IDC. Furthermore, the company was successful with an S12i application with the department of trade and industry (DTI) for the preferential structuring of tax owed to project specifics such as job creation-retention and training of staff. In addition, the project will realise climate financing through the generation of Certified Emission Reductions (CERs) under a Clean Development Mechanism (CDM) project. The project will generate some 350,000 CERs over the 10 year CDM period.

Roof of the powerhouse at SACC.

IDC CEO Geoffrey Qhena says that South African mineral smelters and chemical processes have the potential to generate more than 2,000 MW of electricity from hot gases, such as SA Calcium Carbide has done. The IDC is also supporting two other similar projects. One is the IPSA Newcastle cogeneration plant, which was the first independent power producer in South Africa, using gas purchased from Sasol from the pipeline to produce electricity and steam as the cogenerated products. In another project at Karbochem, civil works has begun on the KC Energy plant that produces steam and will produce electricity as the cogenerated product. Qhena also says that the sugar and forestry industries in South Africa have the potential to generate more than 1,000 MW and 400 MW, respectively, from biomass related cogeneration.