The union said in a statement issued here that the MSA “would allow a certain number of Eskom workers to go on strike should there be any labour disagreement.”

It added that if the issue was not resolved it would embark on "full scale industrial action in pursuit of the minimum service agreement … it would be the first point of war between the NUM and Eskom, and wage negotiations the second.”

Officials at Eskom were not immediately available for comment. 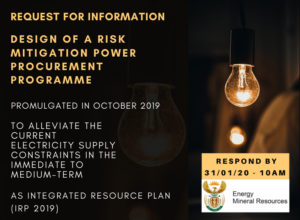 Request for information in respect of the design of a risk...