Between 1990 and 2010 Nigeria actively rebased its GDP resulting in an 89% increase in the estimated size of the economy. As a result, the country now boasts of having the largest economy in Africa with an estimated nominal GDP of USD 510 billion, far surpassing South Africa’s USD 352 billion.

However, risks to Nigeria’s economic growth are the sluggish recovery of the global economy, continued rolling energy blackouts, security challenges in the northeastern part of the country, continued agitation for resource control in the Niger Delta and possible distraction from the ongoing reforms as a result of the upcoming 2015 general elections.

The biggest gas producers in the country including Royal Dutch Shell Plc (RDSA), Chevron Corp. (CVX) and Exxon Mobil Corp. (XOM) have preferred to sell gas at approximately $3 per thousand cubic meters to Nigeria LNG Ltd., which processes and exports the gas, instead of for the $1.80 per thousand cubic meter price on the local market. As a result, Nigeria power plants have been receiving less than half the gas they need.

Companies including Transnational Corp. (TRANSCOR) of Nigeria Plc (NESTLE), Korea National Electric Co. and Forte Oil Plc (FO) paid more than $3 billion for controlling interests in 15 power generators and distributors. Another 10 gas-fueled plants built by the government have also been put up for sale.

Despite the continuing challenges, Nigeria still remains a target for investors eager to tap into electricity demand. The government is considering offers of more than $20 billion for its electricity transmission assets, Power Minister Chinedu Nebo said in an interview with Bloomberg Television Africa.

Nigeria’s power output fluctuated from 1,800 megawatts to 3,000 megawatts in the past year, down from a peak of 4,000 megawatts reached in 2012 and a generation capacity of 7,000 megawatts, according to the Power Ministry.

Even if Nigeria’s plants were producing at full capacity, the transmission lines can only carry 5,500 megawatts, less than a third of what the country needs to end the blackouts. In addition, until power supplies are stable, power distribution companies face challenges in convincing consumers to pay their bills.

For businesses operating in Lagos, the shortages have meant spending 2 million naira ($12,200) on a generator and running it 19 hours a day on average to keep fridges cool and the lights on. Added to this expense the diesel can cost another 180,000 naira per month.

Challenges around the changing electricity landscape

Last year the Nigerian government took bold steps to change the energy landscape and sold its power distribution monopoly along with the hydro- and natural gas-powered plants it ran to attract investment needed to expand supplies.

However the challenge came about due to not ensuring there would be sufficient gas to generate at full capacity. “Unfortunately what the authorities have done is to put the cart before the horse by selling power plants without ensuring adequate gas supplies”, commented Dolapo Oni, head of energy research at Lagos-based Ecobank Research.

President Goodluck Jonathan, who made power reform the centerpiece of his 2011 election campaign, may face a backlash when voters cast ballots in February next year. “The Jonathan administration was expecting a political boost out of the power reforms but that is unlikely to materialise,” commented Philippe de Pontet, a director at New York-based political risk analysts Eurasia Group. “The administration failed to manage expectations on the timetable to improvement, promising unrealistic production targets in the short term.”

Egbin, the country’s largest gas-fired plant, operates at about half of its 1,320-megawatt capacity due to gas shortages because of the price dispute and sabotage of the Escravos-Lagos pipeline that transports the fuel. Others, such as the 1,131-megawatt capacity Alaoji plant, the 506-megawatt Geregu plant in central Nigeria and the 754-megawatt Olorunsogo plant in the southwest were built in anticipation of new pipelines.

What the future holds?

“The power industry is going through ‘teething challenges’ that may last from two to three years. There is clearly light at the end of the tunnel,” says Oni. 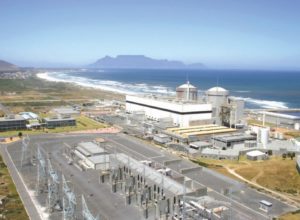 Decision to extend Koeberg’s plant life was a “no-brainer”