In October 2000, PONOVO successfully launched the L336i embedded industrial computer relay testing kit. L336i is the universal smallest and lightest kit which is the sister kit of L336. Based on the L336, the R&D department of PONOVO makes the second improvement on the function and structure. L336i is heavier than L336 about 4KG, but with the embedded computer. This makes operation convenient.

The appearance and structure of L336i is designed by PONOVO that agglomerates the engineers’ hard work and sweat. 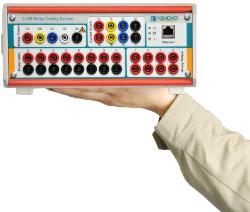 In the beginning of the project, the engineers get suggestions from the leaders and the production base. In order to cooperate with the modular principle, the engineers make improvement in the hardware such as circuit board and interface.

The birth of L336i shines everyone.In the appearance, 10.4 inches LCD and PONOVO CI color makes more enjoyable. The button and trackball are utility. The panels are applied the PMMA-7 material.

In the circuit design, the embedded computer applies T1 88456 chipset and multi-level bus structure. The software applies the Cloud technology that makes its work stable.
In EMC, L336i completely complies with EMC standards and solves the problems of usage lifespan of the relay test set.

The inner structure design applies the design ideas of Chang’E II soft loading and blade modular design. Each inner module is not affected by other plug-ins to realize independently adjustment. When it requires maintenance, users only locates the fault at plug-in and change the damaged plug-in. It is unnecessary to return the kit and saves the cost.

The launch of L336i is the milestone of the relay testing technology field in PONOVO. It is a wonderful works in the relay testing market with its beautiful appearance, rich functions, light weight and low maintenance cost. It not only brings more marveling for the people in the industry, also indicates considerable future market prospects.

How electricity crisis in Bloem- fontein was solved