31 July 2008 – The Namibian government has said only serious and committed investors in the energy sector need apply for licences to generate electricity.

"We have so many offers but we are only prepared to work with serious investors. (Despite so many investors showing interest in the field of energy generation), we have never seen any project taking off," said Joseph Iita, permanent secretary in the department of mines and energy.

His comments come after speculation in Namibian newspapers, about the development of a 400MW solar tower. It was alleged the government had declared its support for the developer of the project and guaranteed 50% of the pre-feasibility funding upon private equity commitment.

Mr Iita said the government had no knowledge of this proposal and had not made any commitments to funding.

Reports originally claimed that the solar tower, which would be 1.5km high and 280m in diameter, would be built in Walvis Bay by a company called Greentower. It was additionally reported that the base of the tower would incorporate a 37 square kilometre greenhouse, which could be utilised to grow crops. 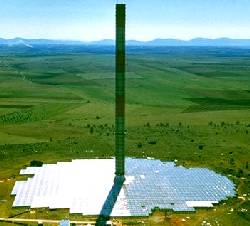 A solar tower, surrounded by a ‘greenhouse’, that, heated by the sun, creates an updraft in the central tower, thus generating electricity. This pictures shows a succesful ’80s pilot project in Spain. 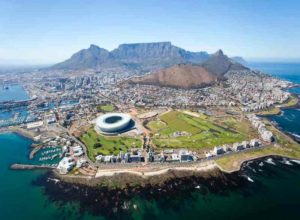 Counting on the WEF on Africa to be powerful