South Africa’s largest producing gold mine announced that it will be developing a ZAR3 billion ($257 million) solar power farm to reduce its dependency on the national grid.

According to CEO of Sibanye Gold, Neal Froneman, the power plant will have a generation capacity of 150MW, CNBC Africa reported.

“You have to put it in perspective [:] 20% of our [Sibanye Gold] costs are related to electricity.  It’s the second biggest single cost and labour is at 55%, so 75% of our costs in the gold sector are related to labour and electricity. Quite honestly, in many respects, you are dependent on something you can’t really control. The 150MW that may come with the solar initiative is going to cost about [ZAR] 3 billion [$257 million]”, Froneman said.

By generating 10% of the mine’s energy needs from solar generated power, Froneman believes they could eventually become completely off-grid.

With the potential to become self-reliant, Sibanye is undecided whether to feed excess power back into the national grid or not. 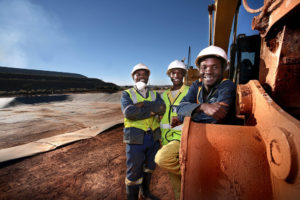 “Would we want to make a profit out if it?  It’s not really our core business and we have to be careful that we’re not distracted into areas that take our focus off our core business”, Froneman said.