Robben Island is renowned for being the place where South Africa’s first democratically elected president, Nelson Mandela (‘Madiba’), was jailed for 18 years of his 27-year prison sentence. Keeping in line with Madeba’s vision for a better future, the UNESCO World Heritage Site has recently adopted a sustainable blueprint for its diverse eco-system.

The National Department of Tourism (DoT) commissioned a solar microgrid, awarding Cape Town-based SOLA Future Energy an EPC contract to design and construct a solar energy microgrid to reduce the island’s dependency on expensive heavy fuel oil. The project is the first of its kind on an island as part of a grid resolution, among other things, aimed at reducing the carbon footprint. The system consists of a solar photovoltaic (PV) farm, combined with a lithium-ion battery storage facility and smart controllers to ensure a seamless electricity supply, whilst significantly reducing the island’s fossil fuel consumption.

SOLAR MICROGRID
The solar microgrid will reduce the island’s fossil fuel consumption by 235,000 litres of diesel per annum or 50% of previous usage. This will result in a reduction of the site’s carbon emission by at least 820 tonnes, and will save the island money during its 25 years of operation. The solar microgrid consists of three power production elements; the solar PV farm consists of 1,960 mono-crystalline modules with a total of 666.4kW power supply. The battery bank, consisting of 2,420 lithium-ion battery cells, is able to store 837kWh with a maximum output of 500kVA. The third power production element is the diesel generators, which are used when no solar or battery storage is available. Multiple controllers between these power production elements are said to balance the power supply and create a smart microgrid, ensuring a seamless supply of power. Due to the high salt content in the air, a material called 3CR12 was used as it is similar to stainless steel; however it can withstand rust from the corrosive nature of sea salt in the air.

In addition to being rich in political history, Robben Island is home to several bird species seeking refuge and breeding grounds on its shores. A refuge for the African jackass penguin – an endangered bird found only on the southern coast of Africa – meant the project design had to adhere to strict environmental standards and requirements. Environmental and archaeological permits were required to commence construction in addition to installing penguin-proof fences and bird-proof wires to protect both the animals and the solar panel wires. The EPC staff were required to attend specialist training in case they had an encounter with any wildlife or had to handle any archaeological artefacts that might be discovered underground.

CONCLUSION
The DoT commissioned this microgrid in order to promote sustainable tourism at key monuments around South Africa, as part of their Tourism Incentive Programme. Through collaboration with knowledgeable partners, Robben Island’s history can now be preserved in a clean and environmentally friendly manner, to the benefit of the local community and the surrounding environment. Laura Robinson, a member of the Robben Island Museum Council, says this project is a unique opportunity to showcase the application of renewable energy technology in the heritage sector in South Africa: “It’s a wonderful project.”

To personally see the Robben Island solar microgrid in action, book a site visit to this project at African Utility Week which will include other historical highlights on this unique World Heritage Site. African Utility Week returns to the CTICC in Cape Town from 13-15 May.

This article was originally published in ESI Africa’s The African Power Elites 2018. Other projects featured in this publication include a tourism and energy linked case study; a microgrid project in Tanzania; and a crowd funding success. The full, electronic publication can be accessed on esi-africa.com. For sponsorship opportunities in the 2019 edition contact Tarryn Bester. 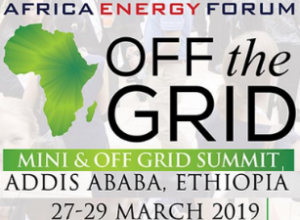 About Africa Energy Forum: Off The Grid 2019