13 December 2007 – Over US$3 million has been generated by the Liberian Electricity Corporation (LEC) since it commenced electricity supply in Monrovia and surrounds in July 2006.

Speaking at a rededication ceremony of the corporation’s facilities earlier this week, Donald Booth, United States Ambassador, disclosed that the corporation today has about 700 customers and is generating enough income while paying it’s own fuel, operation and maintenance costs.

When the corporation started operations in 2006, it had no customers and neither distributed nor generated any electricity supply.

Ambassador Booth said the corporation planned on adding another 7MW of generation capacity and 55 kms of transmission and distribution lines. This additional capacity is sufficient for over 2 000 customers.

America, a major donor in a partnership with the LEC to provide power to Liberia, has over the last 18 months provided US$2 million in assistance.

Harry Yuan, LEC managing director, separately confirmed the information provided by Ambassador Booth and added that LEC’s current revenue collection efficiency was above 95%, up from 15% in August 2006. 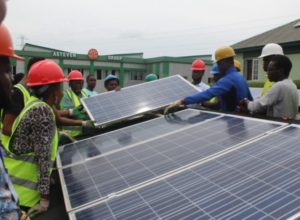