10 September 2012 – On Friday 7th September 2012 Unit 2 of Eskom’s Koeberg nuclear power station in the Western Cape of South Africa was shut down for a rescheduled refuelling, inspection and maintenance outage.

The unit was due to go offline in mid-September 2012 for its scheduled outage, and the early shut down was a result of a fault on the generator of the unit. The generator is on the non-nuclear part of the power station and does not involve the reactor or nuclear fuel. Continued operation could result in extensive damage to the generator and hence the decision was made to shut down the unit and expedite the start of the scheduled outage.

Unit 1 at Koeberg continues to operate at full power. Unit 2 is expected to return to service after its refuelling, inspection and maintenance outage in late November 2012. Each of the two units at Koeberg is shut down for refuelling, inspection and maintenance about every 16 – 18 months. These routine shutdowns are scheduled so as to avoid having both units out of service at the same time and to avoid the winter months in each year.

During these routine planned outages, one third of the used nuclear fuel is replaced with new fuel, statutory inspections and maintenance are performed, and modifications that will improve safety or the plant performance are implemented.

The scheduled shutdown of Koeberg Unit 2 is part of Eskom’s overall maintenance programme for its fleet of power stations. The shutdown has therefore taken into account Eskom’s plans to keep the lights on, and is not expected to result in a shortage of supply to the Western Cape or the rest of the country. 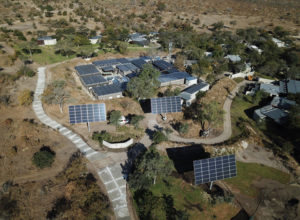 Harnessing the sun and safari experience