Maine, United States — ESI-AFRICA.COM — 09 December 2010 – International financing is being achieved in the North and South American wind power industry, with companies doing business far outside of their home countries, and project announcements being made for wind farms in the United States, Mexico and Brazil.

First Wind has announced that it has received almost US$100 million (R690 million) to construct a wind farm in Penobscot County. The 60-MW wind power plant is being financed with an US$81 million (R559 million) construction loan and a US$17 million R117 million) line of credit from Cleveland-based Key Bank and German bank Norddeutsche Landesbank Girozentrale. The two banks served as the joint lead arrangers for the financing.

On the other side of the country, Duke Energy has announced that the company has secured US$200 million (R1.4 billion) against its 200MW Top of the World Wind power project in Casper, Wyoming. Duke Energy Generation Services (DEGS), a business unit of Duke Energy, will use the funds to finance continued investments in renewable power.

DEGS secured roughly US$231 million (R1.6 billion) in the form of an 18-year term loan worth approximately US$193 million (R1.3 billion), and nearly US$38 million (R262 million) in letters of credit arranged by Japan-based Bank of Tokyo-Mitsubishi UFJ, along with Spain-based BBVA and Caja Madrid, and French company Société Générale.

In addition to international banks financing U.S. projects, American and European companies continue to develop projects outside of their borders.

Brazil is a leading wind market in Latin America with 31.6 GW of capacity expected to be installed by 2025, according to a recent study from IHS Emerging Energy Research (EER). The study also highlights Brazil’s market scale and proactive renewable energy policies as key elements in creating a steady growth in wind power development for the country.

Spanish companies Gamesa and Eolia Renovables de Inversiones are doing business in Mexico. The companies announced that they would develop up to 324 MW of wind power in two separate projects in the state of Oaxaca. The deal calls for construction of the wind farms, including turbine supply, transport, assembly, erection and start-up, and operation and maintenance services during the turbine warranty period. 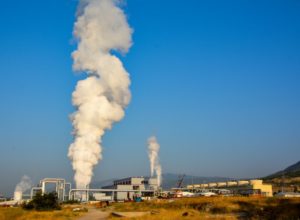