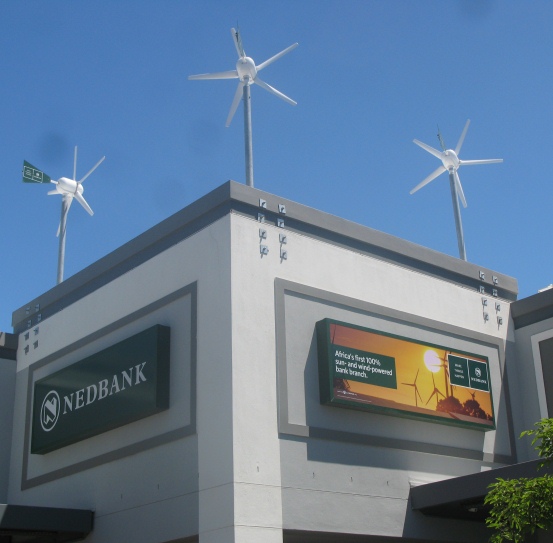 Nedbank’s Landsdowne Corner branch in Cape Town has installed both wind and solar photovoltaics (PV) to effectively ensure it is powered by renewable energy sources.

The Nedbank group has 758 branches across South Africa and about 90% of these are leased, as is the Landsdowne Corner branch. The bank has also looked at fairly small footprint per branch, averaging 385 m2. The decision to run the Landsdowne Corner branch completely on renewables is not part of a rollout of similar plans across the bank’s networks of branches, but is intended to illustrate and prove a concept.

So too, the decision to opt for a hybrid of wind and PV as opposed to a single source was a deliberate one for this demonstration project, which is to see what could be done and highlight the possibilities for renewable energy in South Africa. The existence of such a facility sourcing its electricity from both PV and wind is thought to be a first of its kind in South Africa.

It follows on from a project that became operational in February 2011 whereby Nedbank installed a 1.0 kW wind turbine at its Du Noon branch in the Western Cape to partially offset its dependence on grid electricity. The branch has about 30% of its electricity requirements met off the grid as a result. The Du Noon wind turbine was supplied by Kestrel, a South African manufacturer of four models of small wind turbines that are mostly exported. The Kestrel e300i 1.0 kW turbine was installed at a cost of just under R200,000 and the installation includes a battery bank that provides the branch with a backup for up to two hours in the event of a grid power failure. The payback period for the Du Noon branch wind installation was calculated at 6.2 years.

The Landsdowne Corner project was much more ambitious and cost R1.8 million and a total energy saving a year of R121,000. The payback while long is still positive, with no maintenance over the first five years and the lifespan of the equipment used being a minimum of 20 years for the wind components and 25 years for the solar components.

Kestrel Renewable Energy was contracted by Nedbank to undertake the installation of the system which is capable of supplying the branch’s full annual energy demand of 70,000 kWh. This is equivalent to the electricity supply to six middle income households in South Africa.

The decision to go with a higher proportion of PV was not based on cost as at this particular site the cost of the equivalent wind power and that of PV are similar. Once the decision was made to demonstrate a hybrid wind/PV model, a branch had to be found where the wind and solar characteristics are suitable. The peak solar irradiation at Landsdowne Corner is 7.28 kW/m2/day and the peak wind speed is 5.91 metres per second based on 10 to 15 years of existing information. Various other factors such as size of the branch, the economic implications were also taken into account.

Of particular importance was a landlord that bought into the project, since the Nedbank branch has a small physical footprint and required a much larger portion of the complex’s rooftop to install the 168 PV panels each of 245 W. One of the challenges that did increase the cost of the project by about R500,000 was that the roof of the complex was not strong enough to support the PV panels and structures. Work had to be undertaken to strengthen the roof.

A feature of the project is that there are no storage batteries for the renewables energy, and during the periods when it supplies this surplus electricity to the complex which uses it for security and parking lighting. A bidirectional meter logs the flow of this electricity, since during some months the branch will be a net importer of electricity – however, the net effect is neutral. Thus overproduction from the renewables sources is exported to the mall and underproduction is supplemented by mains power.