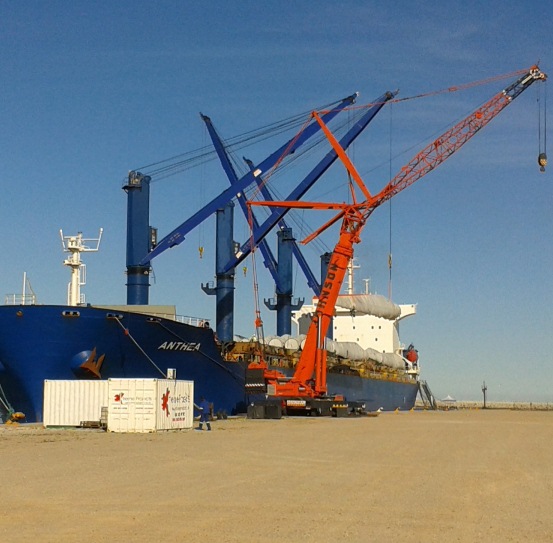 During two visits to the Port of Ngqura Johnson Crane Hire completed a number of complex lifts for the first two batches of giant turbine components for the Cookhouse wind farm near Port Elizabeth. The first lift took place in early April 2013 and the second one was completed in early June.

The cargo lifted by Johnson Crane Hire was bound for the Cookhouse wind farm, situated on 9,000 hectares about 150 km north-east of Port Elizabeth. This wind farm will be the largest on the continent and is being undertaken by Indian wind turbine manufacturer Suzlon Energy and its South African partner, African Clean Energy Developments. A total of 66 turbines, with a combined installed capacity of 138.6 MW, will be required.

Richard Simmons, branch manager at Johnson Crane Hire, explains that the lift in June was extremely challenging. “Johnson Crane Hire was required to lift components from both the hold and the deck of the 100 metre long ship. This meant that the 550-tonne Liebherr crane should have been strategically placed in the centre of the ship. However, this positioning would mean that the crane would not have sufficient reach to the fore and aft extremes of the ship.

“To overcome this challenge, we had to repeatedly move the fully configured crane, with its 165-tonne counterweight and luffing fly jib, to facilitate the lifting and offloading of the components. Once one half of the ship had been offloaded, the ship was turned around and we repeated the process of moving up and down the quayside to lift and offload the remainder of the components. Concurrently with Johnson Crane Hire’s lifting exercise, a third party was busy offloading the large turbine blades from the ship, so the area was extremely congested,” Simmons continues.

Prior to the actual lifts, the Johnson Crane Hire engineers planned the exact positioning of the crane to ensure that the loading on the quayside was within acceptable limits. “The total loading on the quay comprised 165 t of counterweight, 96 t of crane and up to 86 t of cargo. The edge of the quayside is concrete, with an inner gravel portion, which the crane traversed on each horizontal movement along the length of the ship. Once the crane was once again in position for a lift, we strategically placed the outriggers on the quay’s concrete load bearing beam, which was a mere 300 mm wide.”

The components lifted and offloaded in June included 18 freestanding nacelles each weighing
86 tonnes and 28 tower sections, each weighing 62 tonnes and with a length of 22 metres. “The docking fees are high so we were forced to mobilise our team very quickly in order to reduce the ship’s time in port,” Simmons adds.

“Unfortunately, due to the high winds common in the area, we were forced to schedule our lifting time to periods when we had ascertained the wind speeds would be lower. Using long-range forecasts through Windguru, together with handheld wind speed devices and the crane’s own wind speed meter, we discovered that this was generally any time between 18:00 and 21:00. We were fortunately granted permission by the Port authorities to operate a 12-hour shift to mitigate against the inclement weather and we used the ship’s bulk to partially shelter us from the wind.

“Other aggravating factors that the Johnson Crane Hire team had to contend with included the movement of the ship due to tidal activity, and the shifting of the ship as weight transfer occurred. We took great care to ensure that the outer fibreglass shell on the components was retained in pristine condition,” he says.

“I can truly say that these lifts have been precedent setting in terms of the challenges faced, how we overcame them and the sheer weight of the lifts.”