In addition to keeping the traffic light working during power cuts, the project will also be able to determine to what extent traffic intersections can operate without Eskom power and alleviate some pressure from the grid.

"South Africa is known for its year-round sun and it offers perfect conditions to develop solar power applications. I hope this project kick-starts more interest in clean, renewable energy.

"The project is a step along the path to an energy efficient South Africa.

"Besides the obvious benefits for motorists, being solar powered means the traffic lights are more environmentally friendly, because they draw less electricity that has been generated by the predominant burning of fossil fuels," said Barry Bredenkamp, operations manager for the National Energy Efficiency Agency (NEEA).

Solar panels were retrofitted at the top of the traffic light mast, and charge batteries buried in the ground. Currently, the solar panels will operate as a back up when mains power fails and it is estimated the batteries have a life of five to six hours before they need recharging.

The Department of Minerals and Energy gave a directive to have the NEEA, a division of the Central Energy Fund, formed in 2006 as part of a broader strategy to reduce overall energy demand by 12 percent by 2015. 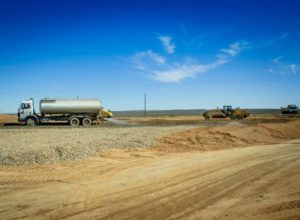