Hydra-Arc’s workshop facilities represent a multi-million rand investment in technologies that are helping to maintain and build the mechanical foundation for South Africa’s present and future petrochemical and power station demands. These include potential downstream nuclear projects.

Meanwhile, Hydra-Arc’s high-tech fabrication facilities are undergoing rapid expansion, with additional buildings that include a pipe welding workshop (6,000 m²), an assembly bay warehouse (12,000 m²) and a heavy engineering workshop (12,000 m²), which are destined for construction alongside the initial 14,000 m², 400 metre long ash lock vessel refurbishment shop that was purpose-built for petrochemical giant Sasol some 18 months ago. Hydra-Arc is a core supplier to Sasol, which has two integrated refineries in Secunda. 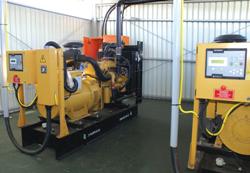 A section of the generator plant room, which houses six Cat gensets that provide a dedicated power solution for Hydra-Arc’s 24 hour welding operations.

All electricity requirements are being provided by Olympian-branded Cat generator sets, sold and supported by Barloworld group division, Barloworld Power. Caterpillar’s Southern African power systems dealer, Barloworld Power supplies, designs and commissions diesel, gas and heavy fuel oil engines to meet a range of standby, prime and peak load requirements across all industry sectors. These services include the design of standalone power plants, developed by Barloworld Power’s professional engineering team for capacities starting at about 1.0 MW and extending to 90 MW.

For Hydra-Arc, Barloworld Power provided the bridging power solution. “The business decision was to either wait for a national utility connection or go live immediately,” says Sheldon Nel, business development and commercial manager at Hydra-Arc, which celebrates its twenty-second year in 2011.

Take Sasol Secunda’s estimated 240 ash lock pressure vessels, each weighing around 40 tonnes when fully assembled, which need to be refurbished on a continuous basis as they reach their design tolerance limits. These five metre long vessels are designed to capture ash from the boilers during the refining stages.

Meeting this technically challenging maintenance programme, at the onset Hydra- Arc and Sasol jointly invested in a number of energy intensive installations that can be considered world firsts in terms of their specific applications. These include state-of-theart automated, horizontal and vertical borers, welding manipulators and subarc welding machines.

“Our sub-arc welding installation and the vertical borer are amongst the largest designs worldwide in this configuration,” Nel says. To accommodate the overhead crane height in the workshop, Hydra-Arc positioned the vertical boring machine within a 9.0 m deep pit.

During the ash lock refurbishment process, between 19 to 22 mm is machined off by the vertical and horizontal borers, followed by automated material deposit welding via the sub-arc units. The current target is to overhaul up to 16 pressure vessels annually.

“On the sub-arc machines, we have set up three stations,” Nel continues. “Each station has a manipulator that can carry 40 tonnes and is designed to rotate the ash lock pressure vessel sections 180 degrees either way during the welding process. Each station has two sub-arc automated welding units that run on tracks.”

Significantly, once the two and a half week welding process on each pressure vessel begins, it can’t be halted at any stage. “If the electricity supply went down, even for a few minutes, we’d have to start from scratch, which would be disastrous from a cost viewpoint, but even more so in terms of the strict turnaround times required by Sasol, which is another reason why Hydra-Arc opted for a generator option.”

Within Hydra-Arc’s power design network, each generator has its assigned task, either as a master or slave module. For example, one generator is dedicated to serving the vertical and horizontal borers on the welding manipulator and sub-arc machines. To ensure continuity of supply, if there is a power dip or spike on the network, the monitoring system will automatically cut out non-essential demands such as air-conditioning and other non-essential equipment to maintain uninterrupted power.

During 2011 Hydra-Arc expects to receive an initial Eskom connection, which will then place its generators on standby. Having said this though, and given projections of anticipated power scarcity over the coming months, Nel anticipates that the Eskom upgrade won’t be sufficient for its long term demand.

Adds Nel: “Either way, thanks to our Cat units, we’ll never have to worry about lost production.”