Sub-Saharan Africa receives only a small share of private investment in infrastructure. One reason for this is its difficulties in getting project finance — difficulties that stem from the low creditworthiness of most African countries, the limits of local financial markets, and the risk profiles typical of infrastructure projects. Whether the region can attract more private foreign currency funding for infrastructure will depend in part on the ability to reduce foreign exchange risks. But in some countries local currency sources, especially local capital markets, also offer good potential. Sub-Saharan Africa has attracted only a small share of the private investment in infrastructure in developing countries, and that share has been heavily tilted toward telecommunications (Leigland and Butterfield 2006). This sector claimed 64 percent of investment flows to the region’s infrastructure sectors in 1990–2004 —a far larger share than the 47 percent in the rest of the developing world. Many factors have influenced these patterns. But Africa’s limited access to project finance has been an important one.

Infrastructure projects with private participation are often financed with a mix of equity and nonrecourse debt — debt contracted by the project company without recourse to the sponsors, also called project finance. Limited access to such debt can severely damage an economy’s ability to attract private investment in infrastructure. Project sponsors will rarely finance infrastructure projects with equity only, or take the project debt fully on their balance sheets. Africa has attracted less nonrecourse bank debt relative to private investment in infrastructure than other developing regions (Figure 1). 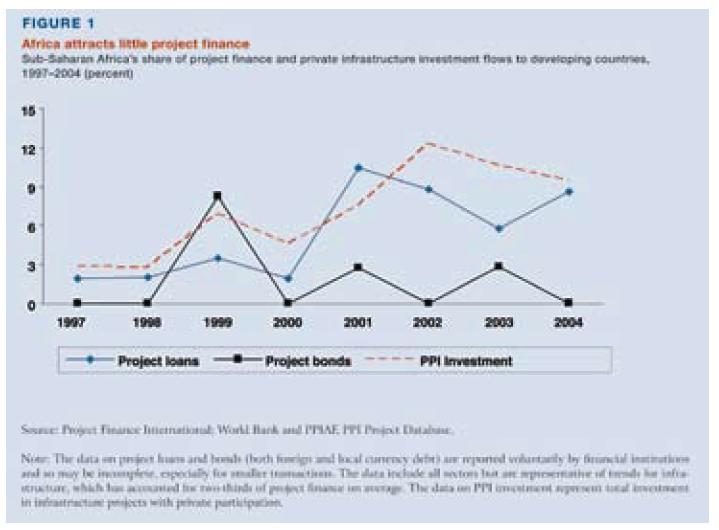 It has been even less successful in raising project finance in capital markets through project bonds. And most of this bond financing was raised for South African projects through local currency issues in that country’s capital markets. Three related sets of factors limit Africa’s ability to tap both foreign and local currency markets to raise private finance for infrastructure, especially long-term debt finance. First, most African countries have low or nonexistent sovereign credit ratings. Only 16 of 48 countries have foreign currency debt ratings, and only 4 of these have ratings of BB — or higher, which provide relatively broad access to financial markets. The countries that have obtained (or have an estimated) foreign currency debt rating of at least BB — represent only 43 percent of regional gross national income (GNI) — and this share is dominated by South Africa. In all other developing regions the share would be more than two-thirds of regional GNI, and in East Asia and Pacific, close to 100 percent.

For most African countries, foreign commercial lending is therefore difficult to access and typically limited to short-term transactions. The ability of infrastructure projects to tap long-term foreign currency lending has depended on a mix of factors that mitigate risk. These include the ability to generate foreign currency revenues and strong support by official (bilateral or multilateral) agencies. Economic links to South Africa (through exports or through ownership by South African investors) also usually help, because they create opportunities to tap that country’s sophisticated financial markets.

Third, features typical of infrastructure projects raise the risk of investments. Compared with projects in many other sectors, those in infrastructure tend to have longer payback and build-out periods and to be more susceptible to political and regulatory interference, which increases the regulatory risk such investments may be facing.

Together, these factors have helped shape the characteristics of infrastructure projects with private participation in Africa: The projects have typically been small relative to those in other regions, and many have been financed entirely with equity. Projects with economics permitting faster payback and shorter-term debt (such as telecommunications) have tended to be favored over those with long payback periods and requiring long-term financing to offer services at an affordable price (such as toll roads). And projects have often depended crucially on support by official agencies.

HOW TO INCREASE FOREIGN FINANCING?

As the financial crises of the late 1990s made clear, exchange rate volatility poses a big risk for foreign currency financing of infrastructure projects that earn mainly local currency revenues. Mechanisms used in the 1990s to mitigate this risk, such as exchange rate–indexed contracts, often proved ineffective under macroeconomic instability. And in many cases they triggered adverse regulatory changes, such as arbitrary tariff reductions that made projects financially unsustainable. Moreover, nothing can insure against the risk of devaluation, and targeted mitigation instruments, such as contingent loans, are rarely available.

Extreme fluctuations in exchange rates have affected private infrastructure investment in Africa less than in other regions. One reason is the region’s limited ability to raise debt in international markets in the first place. Another is its bias toward projects with limited regulatory intervention (such as mobile telephony) or with U.S. dollar revenues (such as export-oriented ports, railways, and gas pipelines).

Still, mitigating regulatory risk related to changes in exchange rates could help improve access to foreign financing for projects that earn mainly local currency revenues and are subject to tariff regulation (such as electricity projects). Mitigating such risk means protecting projects against arbitrary interference by regulatory agencies that would prevent tariff adjustments commensurate with cost increases caused by exchange rate movements. The partial risk guarantee against regulatory default that the World Bank granted for the concession of Uganda’s electricity distribution company, for example, played a key part in attracting private investors (see Mazhar 2005 and Nyirinkinda 2005).

AND HOW TO INCREASE LOCAL FINANCING?

Africa has escaped currency crises like those that have hit many developing regions. But African currencies have nonetheless seen exchange rate shifts large enough to harm a project’s ability to service foreign currency debt and meet equity investors’ expectations on rates of return. So in Africa, as in other regions, project sponsors have in recent years sought to increase local financial markets’ contributions to the debt funding of infrastructure projects that generate mostly local currency revenues. These efforts have led to some local currency loans and bonds, mainly for telecommunications projects.

In recent years local banks in Africa have shown interest in providing local currency loans to infra- structure projects. But these loans have required significant risk mitigation (see box 1). The biggest constraint on the ability of African banks (except those in South Africa) to increase funding for infrastructure projects is their difficulty in reliably funding themselves over the long term. But as experience in such countries as Cameroon, Nigeria, and Tanzania shows, macroeconomic and institutional changes and financial sector reforms can increase longer-term local currency financing for banks and thus slowly increase local bank financing for infrastructure projects.

Long-term local currency financing, often available only in local capital markets, is well suited for infrastructure projects. But only a few developing countries have local capital markets that can provide such financing consistently and in significant amounts. These countries have larger economies than almost all African countries. Moreover, they have sovereign credit ratings and financial markets sophisticated enough to provide currency forwards and interest rate swaps.

Even so, African capital markets can offer a growing source of long-term funding for infrastructure projects. Pension reforms under way in several countries could increase long-term savings and transform them into investment funds for infrastructure.

Some countries already have the beginnings of a contractual savings industry, often in the form of government-initiated pension funds, and their governments have successfully issued long- term fixed rate debt — two of the key elements for providing long-term local currency financing. Kenya has pension fund assets estimated at US$4 billion, around 26 percent of 2004 GDP. Tanzania’s are estimated at only US$1 billion, about 9 percent of 2004 GDP, but its pension funds and insurance companies hold almost as large a share of government securities as those in Kenya. Equally significant, its government has been able to issue 10-year securities, indicating progress in developing local markets.

1. The data are from the Private Participation in Infrastructure (PPI) Project Database (http://ppi.worldbank.org). They include investment flows to greenfield projects, concessions, and management and lease contracts. Divestitures are excluded because they have been relatively unimportant in Sub-Saharan Africa and are based on different financing approaches.

2. The analysis is based on countries that are rated BB – (or Ba3) or higher by one of the three major international rating agencies or, if unrated, have an estimated credit rating of at least BB. Estimated credit ratings are based on a recent analysis provided confidentially by a major U.S. financial institution (see Sheppard 2006).