The European Union has announced that it will partner with Paris-based private equity firm Aster Capital Partners to invest in small energy companies across sub-Saharan Africa.

The EU-backed Electricity Access Ventures Fund, which will be directed by Aster Capital Partners, will invest an estimated $60 million in 20 small businesses over a five-year period, the EU Observer reported.

The fund, which is sponsored by Schneider Electric, will make equity investments in small and medium-sized businesses focused on supplying power and related services through power generation systems such as solar home devices and micro-generation infrastructures – generally off-grid, energy distribution, the newspaper explained.

The Luxembourg-based European Investment Bank, which relies on capital paid in by the EU’s 28 governments, will boost the fund’s capital by $10.87 million for projects aimed at providing electricity access to 1 million people.

Other investors include the French development agency and UK-based Commonwealth Development Corporation.

According to the EU Observer, the project is the latest example of the EU “blending” development grants with finance from private sector investors to pay for large-scale investments.

This approach is being employed in East Africa to finance renewable energy and energy efficiency projects for geothermal energy installations and the 310MW Lake Turkana Wind Project.

“But blending has its critics, particularly among non-governmental organizations which have warned the EU about the dangers of being ‘charmed’ by the private sector and argue that blending projects can lead to developing countries being lumbered with expensive and risky public-private projects,” the newspaper reported. 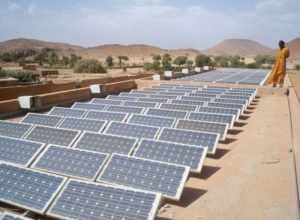