On Wednesday, state-owned power utility Eskom, proudly announced that its senior general manager for renewables, Ayanda Nakedi, was recognised at a wind-focused conference earlier this month, for her contribution to the industry.

The annual conference, which is supported by the South African Wind Energy Association (SAWEA), presented Nakedi with a special accolade of “Wind Energy Pioneer Award” for her outstanding service to the industry.

Upon receiving the award, Nakedi commented: “It is humbling to receive such an honour from my peers. The renewables space is certainly an exciting area to be involved in and for Eskom we are firmly on the path towards reducing our carbon footprint and investing in a sustainable energy future.”

The utility highlighted in a statement that Nakedi has given a pioneering and sustained contribution to wind power in South Africa. she has shown leadership in the growth of the wind industry and her contribution has had positive impact on the country.

Eskom’s Group Chief Executive Brian Molefe said: “This award is considered the Association’s highest honour and we are indeed proud and privileged to have a leader of Ayanda’s calibre in our midst.

“She has indeed been a pioneer, having overseen the commercial operation of Eskom’s 100MW Sere Wind Farm, our first utility-scale renewable energy project.

He added: “The project was completed on time and within budget, with a safety record in line with our Zero Harm policy, and without any environmental legal contraventions or incidents of industrial action – truly a significant achievement!”

In April this year, the power company announced that the wind farm reached its full commercial operation, contributing to saving nearly 6 million tonnes of greenhouse gas emissions over its 20 years’ expected operating life.

The utility’s chief executive, Brian Molefe said that this project has an average annual energy production of about 298,000MWh, enough to supply about 124,000 standard homes.

Eskom said in a statement: “Sere demonstrates our commitment to renewable energy, diversifying our energy mix and reducing our carbon footprint.” 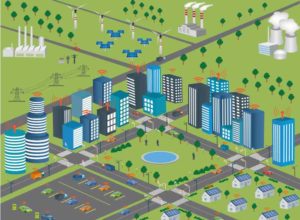 The practice of the Internet of Things in Electricity