Eskom has been benchmarking its coal fired power stations against a comparable fleet of a similar age in Europe and the results are favourable. However, it should be noted that the capacity factor of its power stations has dropped.

The first half of 2008, marked by rolling blackouts across South Africa, represented the end of many decades during which the country took for granted the comfort given by its power generation fleet. It is now over half a decade later, and no further rotational load shedding has occurred since it was suspended on 5 May 2008. Coal stockpiles, which led to the initial problems in 2008, have increased from 12 days’ worth then to 45 days’ worth in 2013. But no sense of the previous comfort has returned. Part of the reason is that the end of the blackouts came about after an appeal by Eskom to energy intensive users of electricity to cut their power usage by 10%.

Secondly, the rapid slowdown of the global economy provided breathing space, and Eskom says it has seen lower than expected electricity demand over the past five years. Following the blackouts of early 2008 Eskom undertook plant performance recovery initiatives for its fleet of coal fired power stations. This was effective in reducing generator unavailability from over 5% to less than 4.5% for a year.

However, sustaining these superior performance levels has become significantly more challenging, Theo Govander, Eskom’s generation group executive, says. In 2009, the reserve margins of some 14% to 15% due to the slowdown in electricity demand gave some level of flexibility. At the same time, though, the condition of the generating plant had adversely begun affecting the outage scope at Eskom’s power stations. By 2010, the year South Africa undertook the massive global marketing campaign of itself, otherwise known as the Fifa soccer world cup, the national demand for energy had started to recover to 2007 levels. At the same time it became noticeable that several of Eskom’s power stations are in their mid-life and this means significant refurbishment work is needed. The oldest two power stations, barring the return to service plants, are Arnot (2,352 MW) and Hendrina (2,000 MW).

Both approach their 40 year milestones. Kriel (3,000 MW) is well past 30 years old, while Matla (3,600 MW) and Duvha (3,600 MW) are at about the 30 year mark. However, maintenance was a kept at a minimum to ensure sufficient capacity during the world cup, as having any instance of blackouts during this tournament would have been a public relations disaster for the country. As it turned out, the system remained healthy between 11 June and 11 July 2010, despite this being one of coldest winters the country has experienced.

An orange line that demarcated interruptible load shedding from the electricity system was barely crossed during the tournament.

The supply demand situation has not remained entirely static since 2008. Since 2008, South Africa has added 2,000 MW of capacity on the supply side in the form of the return to service power station initiative and the addition of open cycle gas turbines. Eskom has signed up 1,000 MW of capacity from independent power producers and municipal generators.

The utility has undertaken demand side management initiatives that have led to more than 1,500 MW of verified savings since 2008. In addition, an interruptible demand agreement exists, whereby for up to two hours a week 2,100 MW of supply to BHP Billiton smelters can be interrupted to help manage the frequency on the system. There has also been the approval of a load shedding critical load management protocol. And finally there have been awareness campaigns to get people in the residential sector to reduce their consumption during the critical peak period of 5pm to 9pm.

During this period peaks can jump by up to 3,000 MW in an hour as households switch on lights, heaters and cookers. The nature of coal fired power stations is that they don’t just switch on and off, thus the equivalent of five units of a large power station is kept on load all day to meet that peak demand. Eskom predicts the 2013 winter peak will be 36.8 GW, which is slightly lower than that of 2012, but this is the average for an hour. What is called the peak within the peak can go as high as 37 or 38 GW. In the summer of 2013, usually a period when demand is lower and Eskom ups its maintenance, it was unable to do so to the extent it had hoped for a variety of reasons.

Flooding that affected a transmission line as well as the failure of a smoothing reactor at Songo substation reduced supply from Cahora Bassa from 1,500 MW to 650 MW (with occasions when supply dropped to zero) during the early part of 2013. The capacity of the link was back at 1,300 MW as of 22 April 2013. Further exacerbating the difficulties Eskom faced during the summer was an unplanned outage at one of the 900 MW Koeberg units, Unit 1, with this returning to service also on the 22 April 2013. When South Africa loses a Koeberg unit two fossil fuel units have to compensate for this, since you don’t just lose 900 MW, but up to 1,200 MW as line losses have to be factored in with power transferred down to the Cape from the north. The need to manage the impact of strike action at Exxaro coal mines also cost the utility 1,000 MW during that period. 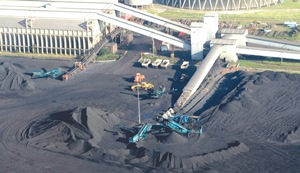 At one of Eskom’s return to service power
stations.

In addition, power station performance is described by Govander as having been volatile. This saw planned non-safety critical maintenance being deferred and it saw the extensive use of the open cycle gas turbines. During January, February and March of 2013, the open cycle gas turbines were run harder than in any month during the past four years, with average load factors of close to 20%. In other words the red line was well and truly breached. Eskom has benchmarked itself against other utilities, and in particular a reference case is German power utility VGB whose 108 unit fleet is comparable in age to Eskom’s. The benchmarking of the energy availability factor, which measures plant availability including planned and unplanned unavailability as well as energy losses not under plant management control, has been done since 2000. In the early years, Eskom’s fleet outperformed that of VGB in terms of worst, median and best quartiles for this energy availability factor.

However, from about 2011, the performance of Eskom’s fleet relative to VGB’s has deteriorated, with its best and median quartile performance now below those of VGB. Its worst quartile fleet performance remains above that of VGB, but in both cases there has been a significant downward trend. However, Eskom’s fleet has been running much harder than that of VGB with its load factor, which indicates the extent to which the generation fleet was loaded on average to produce the energy demanded, being much higher.

For example, during 2011, in its lowest quartile the load factor of Eskom’s fleet was at or above 60%, while that of VGB dropped to well below 30%. In terms of another benchmark, that of energy utilisation factor, which indicates the extent to which available capacity is utilised, Eskom’s fleet has trended upwards to 80% or more for all quartiles. VGB has seen less pressure on its fleet, with periods when the energy utilisation factor dropped to about 50%.

Govander says unplanned outages have become very unpredictable, and the first four months of 2013 saw volatility in unplanned outages increase. “When you lose 800 MW, the existing fleet has to run flat out and defer maintenance.” It is a vicious circle as more maintenance is required to improve reliability of the hard running fleet. 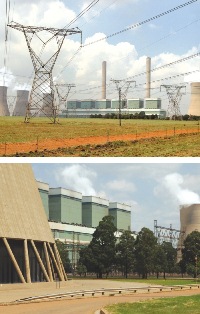 Some units will be out for up to 120 days for planned maintenance during the winter, and Govander says a minimum of nine units will undergo planned maintenance during this period. These units reached technical or statutory limits in terms of maintenance, which cannot be deferred. The focus will be on the heart of Eskom’s fleet, to sustain its life. The plans regarding what are called category three power stations are more flexible. These include the three return to service power stations with Camden (1,510 MW) and Komati (1,000 MW) having a planned life of 15 years, of which Camden is already halfway through its allotment. Grootvlei (1,200 MW) is planned to operate for 20 years.

These power stations in addition to the older Arnot and Hendrina power stations get running maintenance, but not project overalls. This is because plans to extend their lives beyond 50 years depends on finding gaps of time and funding, neither of which are available at this stage. The plan for the next five years is for Eskom to achieve a fleet availability of 80%, with 10% planned maintenance and 10% unplanned maintenance.

Of the planned maintenance, 8% is to be made up of maintenance that is fixed in its schedule, while 2% will be short term maintenance. In terms of new capacity, Medupi and Kusile could provide some breathing space once they are fully operational, but at this stage Eskom has no plans beyond these stations. The renewables when they come online could take some of burden off the existing fossil fleet. The variability of the renewables remains a big problem for Eskom as the old fleet will have to run in parallel to provide security of supply.

However, any megawatts available as soon as possible will be welcome, to provide breathing space and allow for the much needed maintenance.