Johannesburg, South Africa — ESI-AFRICA.COM — 12 July 2011 – The ratings of South African national power utility Eskom Holdings have been affirmed by the international agency Fitch Ratings, which firmly believes that Eskom’s financial profile will continue to improve over the coming years.

Fitch said it considered the increased levels of explicit and implicit government support in 2011, in line with the agency’s expectations, and noted that South Africa’s electricity tariffs were expected to continue tracking towards cost reflectivity over the next four years.

“Fitch believes that Eskom’s financial profile will continue to improve over the coming years, boosted by higher tariffs and ongoing operational cost reductions. In addition, greater transparency from regulators and the government should support the normalisation of the standalone profile at levels commensurate with an international investment-grade rating over the medium term,” said Roelof Steenekamp, director in Fitch’s industrials team.

“Eskom’s ratings are strongly supported by both tangible and intangible government support, which reflects Eskom’s strategic importance to both the country’s energy needs and the broader South African economy,” Steenekamp added.

Fitch said any sovereign rating action would result in the same rating action on Eskom, provided that all support-driven factors remained unchanged. 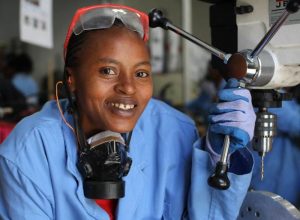