12 April 2012 – Over the past couple of weeks Eskom has continued with high levels of planned maintenance according to figures released in its regular system status bulletins. As of the beginning of the week starting the 9th of April 2012, its planned maintenance stood at 6,573 MW of generation capacity, withdrawn for that purpose.

The South African electricity grid system remains tight, with capacity available to meet evening peaks at about 32 GW to 34 GW while peak demand can reach up 32 GW. The available capacity includes the running of very expensive open cycle gas turbine units, and estimated monthly fuel costs for these have been some R250 million and more in recent months.

Eskom is also believed to have been in the market during the past few months to soak up any spare power capacity in South Africa. It is understood that Eskom has been prepared to pay between mid 70c/kWh (South African cents) to over a rand per kWh, and offered to extend the original three month deals for a further three months.

In addition a number of smelters and furnaces across South Africa have shut down temporarily to assist Eskom, with the utility buying back the energy not used by those operations. 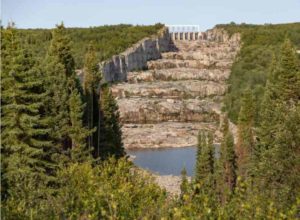 Status and possibilities for micro-hydro generation in South Africa