South Africa’s national power utility, Eskom, set itself a demand side management electricity reduction target of 456 MW for its financial year ending March 2013 – and it expected to achieve between 500 MW and 600 MW for this period.

The increase in demand side management savings Eskom is likely to achieve in its 2012/2013 financial year is a big step up from that of the financial year that ended in 2012 when 313 MW was targeted and 356 MW achieved. “A lot of the savings are being achieved in the residential sector, where there has been a mass rollout of a mixed bag of demand side management technologies,” Eskom integrated demand senior manager, Andrew Etzinger, tells ESI Africa.

The residential sector alone is anticipated to contribute 488 MW of electricity demand reductions for the 2012/2013 year, up from 256 MW and 237 MW in the previous two years respectively. These figures include electricity savings due to solar water heating system rollouts. The technologies being rolled out to middle and higher income residential electricity users during 2012/2013 include almost a million LEDs, 4.25 million compact fluorescent lamps (CFLs), 133,000 low flow shower hoses, 1,500 restrictors for low flow shower hoses and some 22,400 geyser and pool timers. “These technologies are being provided free of charge and in the course of this we visited some 700,000 homes with a resultant estimated 200 MW of savings expected.”

The contribution of the commercial sector towards Eskom’s integrated demand management savings has also been bolstered, thanks to the introduction of new funding models over the past couple of years. “These funding mechanisms are quick to approve and the majority of project costs are paid at the completion of the project,” Etzinger says. The new funding models contributed only about 1.0 MW in the 2011 year, increasing to 20 MW in 2012 and now up to 115 MW for the financial year ending in 2013. 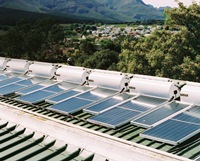 The anticipated contributions of the various mechanisms to the expected 115 MW savings in the commercial sector for 2012/2013 are: standard offer 43%, performance contracting 33%, aggregated standard product 23%, the ESCo model 8% and the standard offer 8%.

The current profile of total demand side management sees only 23% of new savings for 2012/2013 achieved by the CFL rollout programme, which has been responsible for some 75% of the country’s 3,000 MW of demand side savings to date, and is now reaching saturation. “I don’t believe there are very many lower category life style measurement (LSM) households still using incandescent lamps,” Etzinger says. 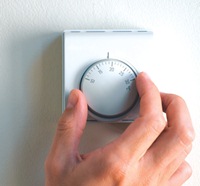 A timer used to increase
efficient use of electricity.

For 2012/2013 some 19% of the demand side management savings total is being achieved through the ESCo model. The new residential mass rollout of various technologies is achieving the largest share of savings, 39%. The standard product is achieving 8% of the overall total, performance contracting 5%, aggregated standard product 3%, a standard rebate that covers solar water heaters and heat pumps is contributing 2%, and the standard offer 1%.

The nature of demand side management has diversified and expanded in terms of the mechanisms used, as South Africa heads deeper into an electricity supply constrained environment pending the commissioning of new generation capacity. Since the inception of Eskom’s integrated demand management programme eight years ago the residential sector, because of the CFL programme, has seen 2,333 MW of demand savings. The industrial and mining sector has been the next largest contributor to savings, with 596 MW over that period. The commercial sector has provided 109 MW of savings, agriculture 18 MW and government buildings 16 MW. “A future focus is to be placed on the commercial sector and public buildings in particular,” Etzinger says.

The savings achieved annually since the inception of Eskom’s integrated demand management programme peaked at 917 MW during Eskom’s 2008/2009 financial year, when the CFL programme peaked, before tapering off to below 400 MW a year subsequently. However, the ambition is to sustain a level of 500 MW to 600 MW a year, and Etzinger names four technologies that are particularly exciting from a demand side management perspective. “These are technologies that while they would get integrated demand management support for a limited period, of say, up to five years, they will be around for many decades and represent permanent gains in energy efficiency.” 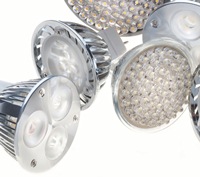 One of these is the rapid emergence of LED technology in the fast moving lighting sector. LEDs represent a superior technology to CFLs, just as CFLs did to incandescent lamps. Just as one was able to replace a 60 W incandescent lamp with a 15 W CFL without losing lumen output, this can now be replaced with a 5.0 W LED.

In addition, while Eskom specifies low mercury content CFLs, this technology still does have the issue of mercury as one of the components. This is not ideal for a product in terms of its lifecycle management.

“Further, while CFL demand side management programmes entail continuous follow up to provide replacement lamps, the lifespans of LEDs are such that they are changing the whole nature of the lighting market; the replacement market is a much more limited part of the business model,” Etzinger says. LEDs have lifespans of decades, which is also conducive to their being integrated into building fixtures and fittings. “The impact of LED technology as an electricity demand reduction tool can be as great as CFLs have proven to be.”

While no hard data exists on the potential size of the market for down-lighters in South Africa that can be replaced by LEDs, there are an estimated 15 million and this translates into a potential 2,000 MW of power savings. 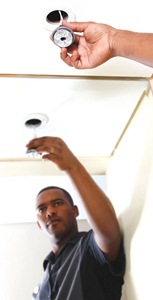 Installation of a low
flow showerhead.

Another of the technologies Etzinger mentions is the use of photvoltaics (PV) as a grid power demand reduction tool and Eskom has gotten permission from the National Energy Regulator of South Africa (Nersa) to roll out a 10 MW programme using three different technologies: PV, small wind and biomass. “However, while other demand reduction measures come in at a cost of ZA42c/kWh, the solar PV subsidy we offer comes in at R1.2/kWh. Even at that price people find it provides an incentive but only just, and they wish there were a few more cents added.” However, the long term demand reduction potential remains exciting.

Many people are asking why not allow net metering and let people put their excess power onto the grid. Etzinger says, “We have taken the first steps and have pilot projects in the initial stages.”

The third technology he mentions is that of waste heat recovery. It is being implemented at industrial scale with a 5.0 MW project underway featuring a kiln. “This is a good project because it is using waste heat for power 24 hours a day seven days a week.”

At a commercial and residential level, heat pumps provide great potential for electricity demand reduction. “Some 8,000 heat pumps have been installed in South Africa providing savings of some 5.0 MW. While it is established technology it is new for this country and we are looking at the commercial sector initially for its rollout.”

Etzinger says the integrated demand management initiative has not gone out of its way to aggressively promote heat pumps as they are still new to South Africa. “At this stage we are targeting early adopters.” 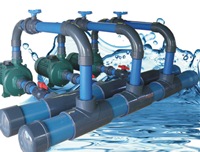 Etzinger also believes the development of plastic solar water heaters represents a significant breakthrough as corrosion is one of the challenges faced by solar water heaters. “Plastics have been developed that are mechanically robust and resistant to ultraviolet radiation.” A supplier is having such a system tested by the South African Bureau of Standards. Etzinger also sees time of use tariffing, which is essentially more cost reflective pricing of electricity, being introduced across all sectors over time (it is already used in how Eskom sells electricity to its key customers). In time this is likely to spread to residential customers.

During South Africa’s three-year electricity price determination (MYPD2) that ended in April 2013 Eskom invested R4.5 billion to achieve power savings of 1,074 MW close to the end of this period, with a target of 1,300 MW. In its application for R13 billion to be allocated for integrated demand management for MYPD3, it hoped to achieve another 2,500 MW of savings over the coming five years. However, this appears unlikely now with the National Energy Regulator of South Africa (Nersa) having slashed that ring fenced figure to R5 billion over the five years of MYPD3.