Carbon Track South Africa has announced a remote energy reporting device that will enable consumers to have access to their energy data in real-time. This will unlock exactly how much energy is being used, generated and ultimately saved as a result of either behavioural changes, or by switching to renewable and sustainable energies. 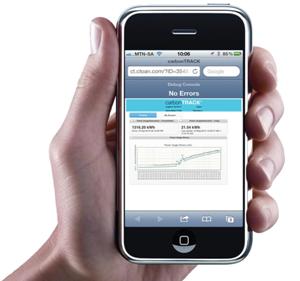 The device and its management software were developed by Carbon Track SA’s Australian partner, which has more than 12 years’ experience in telemetry and software engineering. It can be attached or embedded into renewable energy devices such as solar water heating geysers, heat pumps and solar panels, as well as other devices requiring energy to operate such as laptops, electrical geysers and fridges.

This effectively converts these energy consuming or producing units into smart devices, and their energy consumption or production can be communicated directly to Carbon Track SA’s smart, secure network. CEO of Carbon Track SA, Irvan Damon, says the patented device could also enable utilities like Eskom to track in real-time whether energy devices are being switched off during peak load times or not.

Knowing the geographical location of consumers not conserving energy will give Eskom clear target markets for behavioural change interventions as well as the ability to plan the distribution of energy more efficiently, he says. Damon adds that finance and insurance organisations will also benefit, should the proposed green geyser programme go ahead and policyholders are assisted to replace their electric geysers with solar geysers.

Carbon Track will be the first energy reporting device in South Africa to use game mechanics to reward consumers for being energy efficient. Savings can be redeemed for product discounts, and consumers can socialise their savings via online platforms like Facebook, even competing with family, friends and colleagues. Carbon Track also helps to identify the number of renewable energy certificates being generated by renewable energy devices and can be used as an accurate and effective reporting mechanism for carbon revenue purposes.

“Carbon Track has the potential to put South Africa on the next generation renewable energy map,” Damon says. “For example, Google is of the opinion that technology like Carbon Track is the future.”

Google’s Michael Lock, VP of enterprise sales for the Americas, says: “I believe that virtually every new device will eventually ship with the ability to be connected to the internet and (in most cases) to report its energy use.’’

Damon points out that consumers increasingly expect both content and control from their mobile smart devices and laptops.

“They expect to receive content on their phones and tablets, and they expect to be able to view energy readings on other devices such as lights, TVs and security systems from their phones. South African end users will expect their energy data to show up on mobile devices too,” he says.

A number of pilot programmes are under way in Australia and several have kicked off in South Africa. To date, the results have proven that Carbon Track has the capability to accurately measure energy production and efficiency as well as to communicate this data directly to the company’s smart network.

On its own, it’s just a solar photovoltaic cell