In North Africa, Egypt’s Ministry of Electricity and Renewable Energy last week signed seven Memoranda of Understanding (MoUs) under the government’s feed in tariff (FIT) scheme for the generation of 320MW from solar and wind projects.

The MoUs, with an estimated value of $500 million, were signed with five companies from Egypt, Saudi Arabia and the United Arab Emirates for the generation of 220MW of solar and 100W of wind, online news portal PV Magazine reported.

All seven projects are located on government land, with solar projects to be located in Binban in the Ar Riyāḑ Province in Saudi Arabia and Aswan, a city in the South of Egypt. The wind farms will be developed in Zafarana on the Gulf of Suez.

The agreements were signed last week at the Middle East Solar Industry Association (MESIA) Trade Mission in Cairo where an estimated 150 international and local key energy stakeholders were in attendance.

MESIA claims that the programme will enable electricity consumers and business owners to install solar systems on their roof and feed electricity into the grid. The excess electricity which is fed into the grid will be used as a credit towards future consumption. 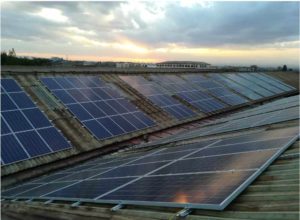