7 May 2012 – That the Agulhas current off the Durban coast in South Africa is one of the five biggest in the world has encouraged Hydro Alternative Energy (HAE) to undertake talks with the eThekwini municipality and propose a R155 million wave energy demonstration unit. The unit would produce less than 1.0 MW.

Durban is not the only city in South Africa that would be suitable to develop the project, Luciano Garcia-Baylleres, the company’s COO said at a presentation in Durban. The interest for developing the demonstration unit there is due to factors such as the technical resources, the skills of the labour force in the area, the port infrastructure, and the Agulhas current which has excellent characteristics for the company’s technology.

HAE CEO Mark Antonucci says the aim is to have an operational pilot unit within two years, depending on regulatory and environmental impact assessment issues. Challenges in harnessing the Agulhas current include the current being some 10 km offshore, it being part of a shipping lane and its depth. The current also reverses direction at unpredictable times of the year.

Standing at about five storeys high, the Oceanus system proposed would be submerged about 40 metres below sea level to prevent interference with shipping. A full size turbine could be able to generate over 5.0 MW and a complete system could generate as much as was commercially viable, or as much as the specific site would allow without altering its basic nature. 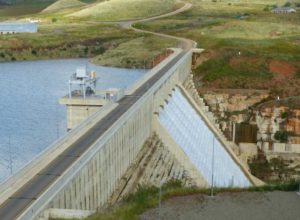